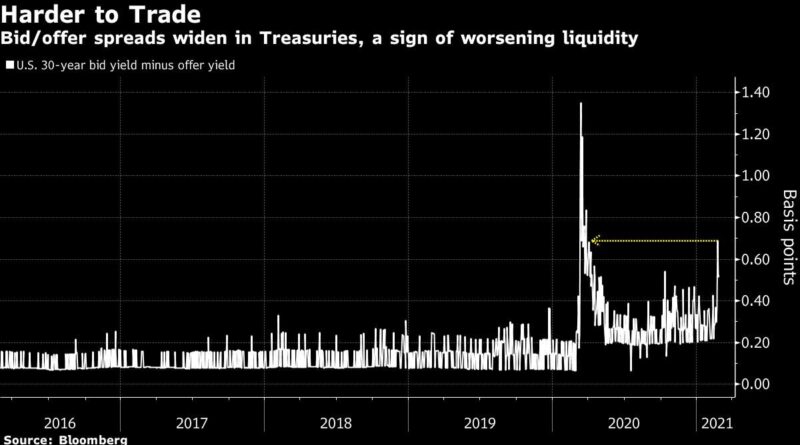 Bond traders have been saying for years that liquidity is there in the world’s biggest bond market, except when you really need it.

Last week’s startling gyrations in U.S. Treasury yields may offer fresh backing for that mantra, and prompt another bout of soul-searching in a $21 trillion market that forms the bedrock of global finance. While stocks are prone to sudden swings, such episodes are supposed to be few and far between in a government-debt market that sets the benchmark risk-free rate for much of the world.

Yet jarring moves occur periodically in Treasuries, forming a bit of a mystery as no two events have been the same. Some point to heightened bank regulations in the wake of the 2008 financial crisis. Scrutiny over liquidity shortfalls intensified in October 2014 when a 12-minute crash and rebound in yields happened with no apparent trigger. Panic selling during the pandemic-fueled chaos a year ago, exacerbated when hedge funds’ leveraged wagers blew up, brought the issue to the fore again.

And then came last week, when the gap between bid and offer prices for 30-year bonds hit the widest since the panic of March 2020.

At issue is whether this vast market is more vulnerable to sudden bouts of turbulence thanks to measures that have made it more difficult for banks to hold Treasuries. Some analysts say the tumult last week was magnified by questions over whether the Federal Reserve will extend an easing of bank capital requirements, which is set to end March 31. Put in place early on in the pandemic, the measure is seen as making it easier for banks to add Treasuries to their balance sheets.

The 2014 episode triggered a deep dive into the market structure, and regulators have pushed through some changes — such as increased transparency — and speculation has grown that more steps to bolster the market’s structure may be ahead.

“While the scale and speed of flows associated with the COVID shock are likely pretty far out in the tail of the probability distribution, the crisis highlighted vulnerabilities in the critically important Treasury market that warrant careful analysis,” Fed Governor Lael Brainard said Monday in prepared remarks to the Institute of International Bankers.

There are plenty of potential culprits in last week’s bond-market tumble — which has since mostly reversed — from improving economic readings to more technical drivers. Ultra-loose Fed policy and the prospect of fresh U.S. fiscal stimulus have investors betting on quicker growth and inflation. Add to that a wave of convexity hedgers, and unwinding by big trend-following investors — such as commodity trading advisers.

Based on Bloomberg’s U.S. Government Securities Liquidity Index, a gauge of how far yields are deviating from a fair-value model, liquidity conditions worsened recently, though it was nothing like what was seen in March.

For Zoltan Pozsar, a strategist at Credit Suisse, the action began in Asia with bond investors reacting to perceived hawkish signs from the central banks of Australia and New Zealand. That sentiment then carried over into the U.S. as carry trades and other levered positions in the bond market were wiped out. A disastrous auction of seven-year notes on Thursday added fuel to the unraveling.

Last week’s drama “brings to mind other notable episodes in recent years in which a deterioration in the Treasury market microstructure was primarily to blame,” JPMorgan & Chase Co. strategist Henry St John wrote in a note with colleagues.

One key gauge of Treasury liquidity — market depth, or the ability to trade without substantially moving prices — plunged in March 2020 to levels not seen since the 2008 crisis, according to data compiled by JPMorgan. That severe degree of liquidity shortfall didn’t resurface last week.

The bond-market rout only briefly took a toll on share prices last week, with equities surging to start this week, following a sharp retreat in Treasury yields amid month-end buying.

The Fed cut rates to nearly zero in March 2020, launched a raft of emergency lending facilities and ramped up bond buying to ensure low borrowing costs and smooth market functioning. That breakdown in functioning has sparked calls for change from regulators and market participants alike.

For now, Treasuries have settled down. Pozsar notes that the jump in yields has provided an opportunity for some value investors to swoop in and pick up extra yield, effectively helping offset the impact of the leveraged investors who scrambled for the exits last week.

“Some levered players were shaken out of their positions,” Pozsar said in a forthcoming episode of Bloomberg’s Odd Lots podcast. “It’s not comfortable — especially if you’re on the wrong side of the trade — but I don’t think that we should be going down a path where we should redesign the Treasury market.”

(Updates with details on Bloomberg’s liquidity index in 10th paragraph, and a chart) 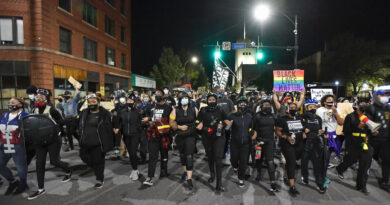 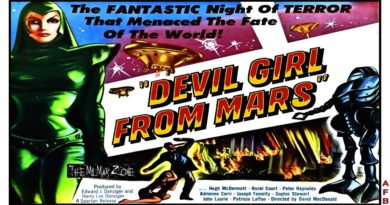 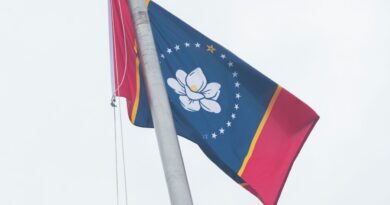