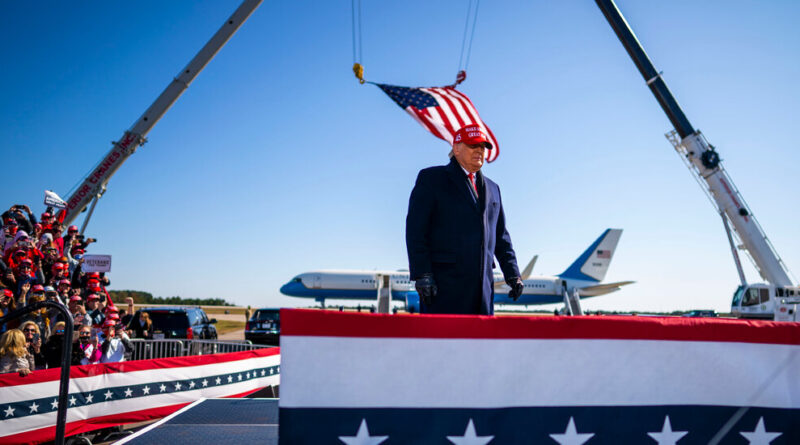 President Trump arrives at Election Day on Tuesday toggling between confidence and exasperation, bravado and grievance, and marinating in frustration that he is trailing Joseph R. Biden Jr., whom he considers an unworthy opponent.

“Man, it’s going to be embarrassing if I lose to this guy,” Mr. Trump has told advisers, a lament he has aired publicly as well. But in the off-camera version, Mr. Trump frequently exclaims, “This guy!” in reference to Mr. Biden, with a salty adjective separating the words.

Trailing in most polls, Mr. Trump has careened through a marathon series of rallies in the last week, trying to tear down Mr. Biden and energize his supporters, but also fixated on crowd size and targeting perceived enemies like the news media and Dr. Anthony Fauci, the federal government’s infectious disease expert whom he suggested on Sunday he might try to dismiss after the election.

At every turn, the president has railed that the voting system is rigged against him and has threatened to sue when the election is over, in an obvious bid to undermine an electoral process strained by the coronavirus pandemic. It is not clear, however, precisely what legal instruments Mr. Trump believes he has at his disposal.

The president, his associates say, has drawn encouragement from his larger audiences and from a stream of relatively upbeat polling information that advisers have curated for him, typically filtering out the bleakest numbers.

On a trip to Florida last week, several aides told the president that winning the Electoral College was a certainty, a prognosis not supported by Republican or Democratic polling, according to people familiar with the conversation. And Mark Meadows, the White House chief of staff, has responded with chipper enthusiasm when Mr. Trump has raised the idea of making a late bid for solidly Democratic states like New Mexico, an option other aides have told the president is flatly unrealistic.

His mad dash to the finish is a distillation of his four tumultuous years in office, a mix of resentment, combativeness and a penchant for viewing events through a prism all his own — and perhaps the hope that everything will work out for him in the end, the way it did four years ago when he surprised himself, his advisers and the world by winning the White House.

But by enclosing himself in the thin bubble of his own worldview, Mr. Trump may have further severed himself from the political realities of a country in crisis. And that, in turn, has helped enable Mr. Trump to wage a campaign offering no central message, no clear agenda for a second term and no answer to the woes of the pandemic.

Most people in the president’s inner circle share his optimism about the outcome of the race, even as they fight exhaustion and the president’s whipsawing moods, interviews with more than a dozen aides and allies showed. But some advisers acknowledge that it would require several factors to fall into place. They spoke on condition of anonymity to discuss sensitive internal deliberations.

Republican lawmakers have offered less rosy assessments of his prospects, and in private some Trump advisers do not argue the point. One high-ranking Republican member of Congress vented to Mr. Meadows last month that if Mr. Trump “is trying to lose the election I can’t think of anything I’d tell him to do differently,” the lawmaker recalled, noting that the aide only nodded his head in acknowledgment. “They just think they can’t do anything about it.”

Beyond the capital, though, some Republicans insist that Mr. Trump can again defy the odds, and that a devoted base will fuel a traditional G.O.P. surge in Election Day voters.

Joe Gruters, the chairman of the Republican Party of Florida who appeared with Mr. Trump in Tampa last week, described the president as “a lock” in the state.

“You can take it to the bank and cash the check,” Mr. Gruters said, adding of the Democrats: “We’re crushing them on the ground. That’s what’s going to make the difference.”

Seldom far from Mr. Trump’s thoughts, however, is the possibility of defeat — and the potential consequences of being ejected from the White House.

In unguarded moments, Mr. Trump has for weeks told advisers that he expects to face intensifying scrutiny from prosecutors if he loses. He is concerned not only about existing investigations in New York, but the potential for new federal probes as well, according to people who have spoken with him.

While Mr. Trump has not aired those worries in the open, he has railed against the democratic process, raising baseless doubts about the integrity of the vote.

He has also mused about prematurely declaring victory Tuesday night, but if there’s any organized plan to do so his top lieutenants are not conveying it to their allies. One congressional strategist said that he spoke to Jared Kushner, Mr. Trump’s son-in-law, on Sunday and that Mr. Kushner not only didn’t ask for buy-in from Capitol Hill Republicans for such a plan but also didn’t mention the prospect at all.

Mr. Trump’s advisers do continue to believe he has a realistic chance of besting Mr. Biden, but they concede it would take a last-minute breakthrough in one of the Great Lakes states where he is currently trailing. Some Republicans, however, are already bracing for losses or close calls in a series of Sun Belt states — and expressing alarm that Mr. Trump may have turned some of them prematurely blue in the same fashion that Barack Obama’s 2008 landslide made Virginia and Colorado Democratic bulwarks.

“Arizona and Georgia are a big deal,” said Nick Everhart, a Republican strategist. “That’s a shift people thought would come but once they’re gone they’re hard to reel back.”

The president himself has done little to strengthen his chances in the final days of the race. On Friday, Mr. Trump used a rally in Michigan to float a baseless theory that doctors are classifying patients’ deaths as related to the coronavirus in order to make more money, drawing fierce condemnation from medical groups, as well as Mr. Biden and Mr. Obama.

And on Saturday, in Pennsylvania at the site where George Washington mapped out his Delaware crossing during the Revolution, aides wrote out a sober speech for the president to deliver. Midway through, he seemed to get bored and began to riff about the size of Mr. Biden’s sunglasses.

He has frequently used his speeches to deliver long diatribes against Mr. Biden and his son, Hunter Biden, even though some Trump advisers believe the whole subject is a sideshow in the midst of a public-health disaster. But Trump associates say he simply enjoys attacking the Biden family.

Senator Kevin Cramer, Republican from North Dakota, said that he believed Mr. Trump did not let the possibility of losing interfere with his approach.

“He certainly isn’t going to buy into anybody’s argument that’s all over or that he’s lost,” Mr. Cramer said.

What confounds some Republicans is how little Mr. Trump is discussing last month’s confirmation of Justice Amy Coney Barrett to the Supreme Court; some G.O.P. senators have made that achievement a centerpiece of their campaigns.

Campaigning in Kentucky this weekend in pursuit of his seventh term, Senator Mitch McConnell, the majority leader, repeatedly trumpeted Justice Barrett and the other two Trump-nominated judges on the high court while not mentioning Mr. Biden’s name once.

Though Mr. Trump has reconstituted parts of his 2016 inner circle in the waning days of the race, the operation lacks a figure who is both willing and able to force the president to stick to a script. Four years ago, Mr. Trump viewed the campaign’s top official, Stephen K. Bannon, as something of a peer— one who was able to focus the candidate. These days, Mr. Trump often rages to associates and aides that he believes they are failing him.

There was a fleeting effort to bring in a new voice as recently as three weeks before the election: Some Trump advisers floated the idea of recruiting Karl Rove, the former George W. Bush adviser, who has been involved in a super PAC supporting Mr. Trump, or someone like him.But by the time that idea was discussed the election was already less than a month away. Some Republicans appear to be looking past the end of the Trump era, whether that comes on Tuesday night or in another few years.

Several ambitious young Republicans have recently made visits to the early primary states of Iowa and New Hampshire, including Senator Tom Cotton of Arkansas, Senator Ted Cruz of Texas and Gov. Kristi Noem of South Dakota. Ms. Noem also quietly visited Mr. Trump at Mar-a-Lago, which may become another stop on the G.O.P. primary circuit should Mr. Trump lose. Another, Senator Rick Scott of Florida, is maneuvering to take over the National Republican Senatorial Committee, an effort seen by other Republicans as a step toward running for president.

There is even quiet lobbying underway for the chairmanship of the Republican National Committee, a body helmed for four years by Ronna McDaniel.

Several Trump loyalists are seen as potential successors in that job, including David Bossie, who is an R.N.C. member from Maryland, as well as the Ohio Republican Party chairwoman, Jane Timken, whom the president effectively installed in her post. Mr. Trump’s son Donald Trump Jr. and his girlfriend, the conservative pundit Kimberly Guilfoyle, have both been discussed as possible chair, though their aides said they are not interested in the job.

Mr. Gruters said he was not aware of any efforts by the president’s son to pursue the R.N.C. job, and praised Ms. McDaniel. But Mr. Gruters said a Trump scion could ascend to the job if she were to step down.

“Ronna has really done well and she certainly deserves the nod if she decides to continue on,” Mr. Gruters said. “Don Jr. obviously would be credible for anything he wanted to go after. He has a solid command of the base. He has the ability to raise a lot of money and would be another superstar for the party.”

Texas boy, 3, dies after accidentally shooting himself in the chest at birthday party 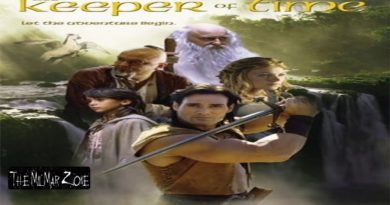 The Keeper of Time 2004 — A Time Travel Movie Trailer 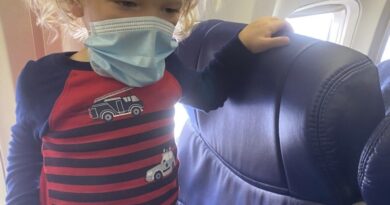