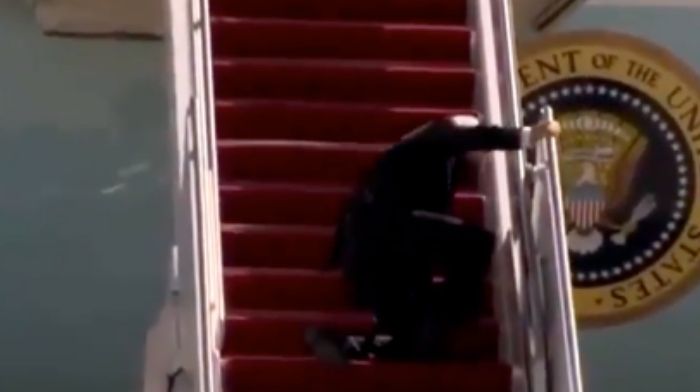 While boarding Air Force One on Friday, President Joe Biden tripped twice, and then fell, all while holding onto the stair railing. After recovering, he appeared to brush off a knee, then proceeded to board the plane.

Biden was on his way to meet with Vice President Kamala Harris and individuals in the Asian community in Atlanta.

The tumble is a little hard to watch:

President Biden stumbles while walking up the stairs to Air Force One
pic.twitter.com/t959EPMHpu

White House Communications Director Kate Bedingfield was quick to take to Twitter to assure the American people that Biden was uninjured and went on his way.

I know folks have seen that President Biden slipped on his way up the stairs to AF1, but I’m happy to report that he is just fine and did not even require any attention from the medical team who travels with him. Nothing more than a misstep on the stairs.

She told reporters aboard Air Force One:

‘It’s pretty windy outside. It’s very windy. I almost fell coming up the steps myself. He is doing 100 percent’https://t.co/6GIwCG2xME

RELATED: Green Bay Is The Canary In The Coal Mine Of American Democracy

The Media Questioned Trump’s Health For A Ramp Walk

So far, there’s been a conspicuous lack of media outlets seizing on the moment, or pouncing on the opportunity to question Biden’s health.

This was not the case when it came to Donald Trump.

In a report from The Guardian, in June of 2020, at an appearance at West Point, the media claimed President Trump had difficulty walking down a ramp.

Knowing how the media would portray it, Trump at the time tweeted out,

“The ramp that I descended after my West Point commencement speech was very long and steep, had no handrail and, most importantly, was very slippery. The last thing I was going to do is ‘fall’ for the Fake News to have fun with. Final ten feet I ran down to level ground. Momentum!”

Much earlier, in 2017, the BBC claimed that Trump was ‘scared of stairs,’ quoting anonymous “insiders.”

The 2020 ramp moment made it’s way to the campaign trail, where Biden ironically prodded the President, and bragged about his stair-climbing prowess.

Speaking to the media, Biden said, “Look at how he steps and look at how I step. Watch how I run up ramps and he stumbles down ramps. C’mon.”

Biden previously bragged about his ability to climb stairs. So it’s fair game. Someone should ask him about this at his press conference. pic.twitter.com/HdGt7NzcIV

The president also appeared to have trouble raising a glass of water to his mouth during a speech at West Point a day before he turned 74, the oldest a president has been in his first term.

Joe Biden was 78 years old the day he was inaugurated as President.

One thing is clear.

Neither Biden’s tumble or Trump’s ramp walk were nearly as bad as the time Hillary Clinton appeared to pass out and collapse, while multiple handlers quickly loaded her into a van:

Now is the time to support and share the sources you trust.
The Political Insider ranks #16 on Feedspot’s “Top 70 Conservative Political Blogs, Websites & Influencers in 2021.” 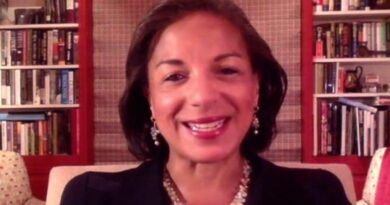 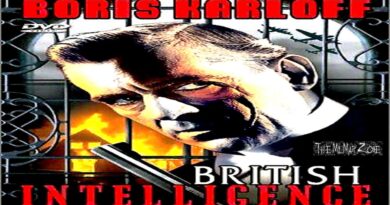 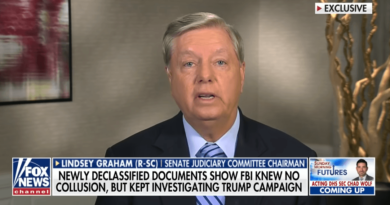 Somebody From Obama’s FBI Needs To Go To Jail