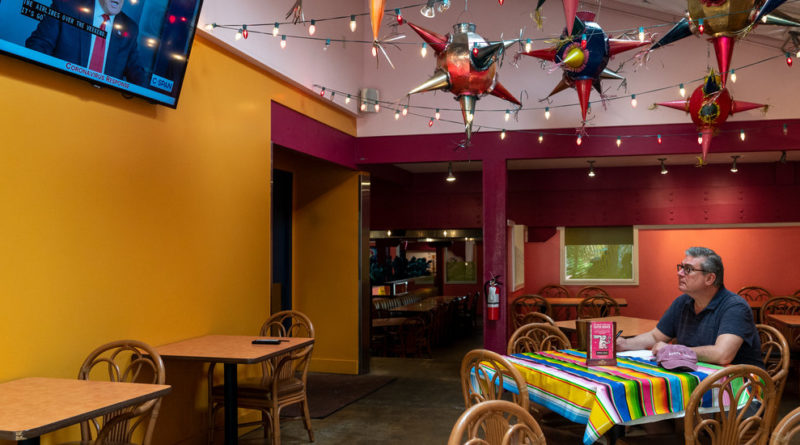 WASHINGTON — For some supporters, President Trump’s daily appearances with his coronavirus task force are a reassuring ritual during a time of crisis, consumed from the folds of a leather sectional, snacks and beverages within easy reach.

“If anybody is going to give us the most answers, it’s the White House,” said August Gernentz, 19, a construction worker from Red Wing, Minn., as he settled into his bedroom Thursday night with potato chips and a Dr Pepper to stream the briefing on his big-screen television.

For the president’s opponents, the news conference has become a daily hate-watch, a blaring infomercial in which Mr. Trump claims credit, demands gratitude, spreads false information and attacks the press.

“He’s not qualified to answer that! What does he know?” Irma Sindicic, 50, a second-grade teacher who lives on Staten Island, yelled at her computer screen the same night as she listened to Mr. Trump deliver a vague answer about the availability of tests while she cooked pork chops. “Where’s Fauci? I want Fauci,” she said, referring to Dr. Anthony S. Fauci, one of the leading health experts on the president’s coronavirus task force.

The briefings make her blood boil, but Ms. Sindicic said she continues to tune in, night after night. “You need a debrief from the briefing because you have to weigh what is fact and what is fiction,” she said. “But I find if I want to be informed in the world, I have to have it on. It’s hard.”

Then there are less partisan daily viewers like Tim Bray, 49, a schoolteacher from Austin, Texas, who voted for Hillary Clinton in 2016 but is willing to give credit to the president when he thinks it is deserved.

“It was a good performance,” he said of Mr. Trump’s Thursday evening news conference, which the president uncharacteristically kept to just 20 minutes.

Those opinions were among the reactions from almost two dozen regular viewers of Mr. Trump’s appearances interviewed before, during and after Thursday’s briefing and in follow-ups after Friday’s.

The group included men and women of different ethnicities, ages 19 to 88. They were from the South, the Midwest and the East and West Coasts, and their opinions of Mr. Trump varied from strong support to deep disdain.

Democrats and Republicans alike in the group described watching Mr. Trump as something close to a civic duty, even while they agreed that he was probably appearing at the briefings to help him in a re-election year.

For Americans such as these, many stuck in their homes and trying to make sense of simultaneous health and economic crises they could not have imagined only a few months ago, Mr. Trump’s nightly news conferences have helped give structure to what they described as a series of Groundhog Days spent in anxious quarantine.

They are part of an audience of millions who have watched on broadcast networks, cable news outlets and onlinesince Mr. Trump first made a surprise appearance at a briefing hosted by Vice President Mike Pence on March 14, and decided he liked it.

Mr. Trump’s daily appearances since then, rife with inaccuracies and false claims and laden with grievance and boasts, bear little resemblance in style to President Franklin D. Roosevelt’s fireside chats, the radio addresses during which he tried to soothe an anxious nation through a depression and a world war.

In interviews, Democrats and Republicans alike conceded that the president appeared to be in over his head in dealing with the coronavirus, and that Dr. Fauci and Dr. Deborah L. Birx, the White House’s coronavirus coordinator, were the more reliable voices to listen to for accurate information.

Supporters of the president viewed the crisis as so overwhelming that they were willing to forgive Mr. Trump if he was floundering, because who wouldn’t be, they said. His opponents by and large said they couldn’t think of a person less suited to the moment.

But the rapt attention the briefings have attracted from both the president’s supporters and many of his detractors suggest an instinct common to the audiences of both Roosevelt, one of the country’s most celebrated wartime presidents, and the president who has tried to brand himself as one.

“Americans have been in the habit for decades of listening to the president during a crisis, and whatever he says, the habit remains,” said Michael Beschloss, a historian.

The briefings, which have evolved organically since Mr. Tump’s first session last month, have also become a singular phenomenon.

Roosevelt held “background” conferences with reporters in the Oval Office, and President John F. Kennedy mastered the television format and socialized with journalists. But no president has spent as much sustained time on television or jousting with the press.

Opponents of sitting presidents have traditionally attacked them for any attempt at a “Rose Garden strategy” exploiting the advantages of incumbency in running for re-election. Democrats say Mr. Trump is running his campaign from the White House briefing room and have urged television executives not to carry his appearances.

The daily spectacle has made stars of public health officials like Dr. Fauci and an unlikely fashion icon of the scarf-wearing Dr. Birx, two officials whom Americans across the political spectrum have come to rely on for clear information about the spread of the virus.

The briefings also pose one of the biggest tests for Mr. Trump: whether he can reshape the narrative of the pandemic to make it seem like his and his administration’s belated and indecisive response was somehow a success.

Even one of his most prominent supporters questioned the president’s behavior and message at the briefings.

“The briefings began as a good idea to educate the public about the dangers of the virus, how Americans should change their behavior and what the government is doing to combat it,” The Wall Street Journal said in an editorial on Thursday.

“But sometime in the last three weeks,” it added, “Mr. Trump seems to have concluded that the briefings could be a showcase for him.”

The editorial writers’ solution: Make the briefings no more than 45 minutes and confine the president’s appearances to twice a week.

Despite apparently following that advice as well as some of his advisers’ the day the editorial came out, Mr. Trump lashed out at The Journal and then reverted to form Friday evening, spending almost two and a half hours in the briefing room sparring with reporters.

When asked about what metrics he was weighing as he decided when to reopen the economy, Mr. Trump pointed to his head. “That’s my metrics,” he said. He presented the decision of whether to reopen the country as a cliffhanger right out of “The Apprentice,” calling it “the biggest decision of my life.”

Mr. Bray, the Austin teacher, had a less enthusiastic reaction to the performance than he had to the briefing the day before. “I worry that he’s going to privilege the economic argument over the health argument because the health argument is causing sacrifice leading to economic slowdown,” he said. “I think he views that as a losing position when it comes to politics.”

But for the most part, Mr. Trump’s daily appearances have confirmed preconceived notions about him, for those interviewed by The New York Times and by national pollsters. Many of his supporters see an entertaining businessman concerned with getting the economy back on track, and they are almost always willing to give Mr. Trump the benefit of the doubt.

False statements, like Mr. Trump’s claim that people were being tested for the virus when they got off airplanes and trains, they blame on the president’s advisers.

“Information is probably coming very fast,” said Eddie Bernal of Austin, who voted for Mr. Trump in 2016 but is undecided about 2020 and whose two restaurants and catering business have been closed, save for takeout, for nearly four weeks. “He’s relying on what people are telling him, on what’s being given to him by his administration.”

If he did not appear to act in response to intelligence reports warning about the coronavirus in January, he has made up for it since. “I think he’s getting a lot more results that we don’t know yet that are probably very positive,” said Joe Aliotta, 54, a Staten Island businessman.

The president’s detractors see a man preoccupied with his re-election campaign who has dangerously played down the virus, risking lives, and consistently makes false and contradictory statements — just as he has throughout his presidency.

“Just tell us what’s happening. I just want him to tell us the facts,” said Jacob Cavner, 26, a derivatives trader in Chicago, who along with his fiancée turned the daily news conference into a drinking game last week, taking three gulps of his beer every time Mr. Trump lashed out at a reporter.

“I feel sorry for him because he has a position that he can’t handle or that he doesn’t know how to handle,” said Grace Sweet, 88, a retired guidance counselor from Jackson, Miss. “I don’t believe anything he says. I really don’t.”

The partisan split on trusting the information Mr. Trump delivers has been striking. A new poll by Politico and Morning Consult found that 79 percent of Republicans were satisfied with the quality of the information about the pandemic that they were getting from Mr. Trump, while only 16 percent of Democrats said they were.

And even among Republicans, there has been a notable split between those who watched Fox News regularly, and those who did not. Fox News viewers were 15 points more likely to say Mr. Trump “got it about right” when the coronavirus began to spread than those who did not watch, according to a poll by Navigator Research, which is overseen by leaders of several progressive organizations.

While some recent polls have suggested that confidence in Mr. Tump’s handling of the outbreak was slipping, a recent Quinnipiac University poll his approval rating sits at about 45 percent, his highest rating in that poll since taking office.

One of those who supports the president is Henry Louden, 53, a developer in Miami Beach interviewed Thursday night. Mr. Trump, he said, was doing “the best he can” given that he was confronting a “new crisis.”

Mr. Louden, whose 19-year-old son tested positive for the virus after going on a spring break trip to Cabo San Lucas, Mexico, despite warnings about the pandemic, admitted that he found it unhelpful when Mr. Trump said he would not wear a mask, despite guidance from the Centers for Disease Control and Prevention advising people to do so.

“He could have said he will consider it,” Mr. Louden said. But what he viewed as a misstep barely figured in his overall assessment of Mr. Trump’s performance.

“I feel he’s putting all of his energy into this crisis to brief the American people every day and to provide us guidance, hope and economic support,” he said. “The president should not have to deal with obnoxious questions.”

Sarah Dwyer, 47, a Democrat who lives in Montclair, N.J., was left with the opposite impression after watching the same briefing.

“If Trump never made an appearance or spoke a word, he’d really have this country tricked into thinking he has this under control,” she said. “He does have a good supporting cast.” 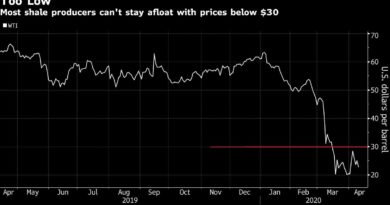 OPEC+ Ministers Meet in Race Against Market to Clinch Deal 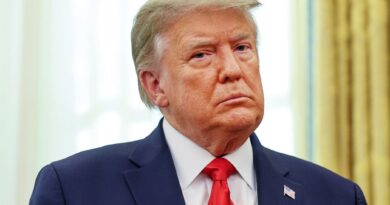