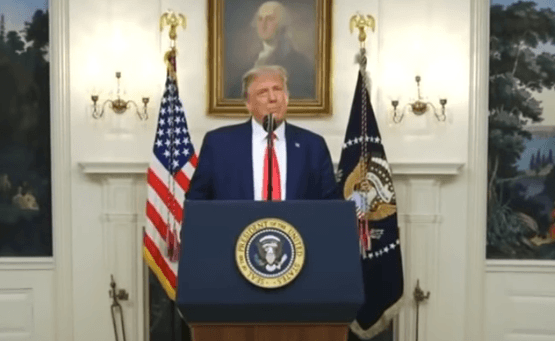 News of President Trump contracting the coronavirus and falling ill has caused serious concern – both for the President, and for the safety and well-being of our country.

Thank you for the love you are sending our way. I have mild symptoms but overall feeling good. I am looking forward to a speedy recovery.

But what happens if President Trump does, God forbid, become too ill from the coronavirus to carry out his duties for any length of time?

Here’s what we know from our recent history.

There have been several instances where Presidents have had to transfer power, ranging from the relatively mundane to the catastrophic.

Just looking at the 20th Century to present:

In 2002 and 2007, President Bush transferred his powers to Vice President Dick Cheney, by invoking Section 3 of the 25th Amendment to the US Constitution, while he was sedated for routine colon cancer tests.

Thankfully, nothing eventful occurred during those short periods.

However, it is interesting to note that during routine health check ups, the entire power of the Presidency must sometimes pass to someone else.

Remember, the President carries the nuclear football. He must be ready at a moment’s notice.

President Ronald Reagan did not officially invoke the 25th Amendment in July of 1985 when he had colon cancer surgery. But he did essentially act in the same manner.

“I will temporarily remove myself and have the vice president serve as acting president,” he wrote. “When I am able again to serve I will reclaim the presidency.”

Much more seriously, when Reagan was the victim of an assassination attempt on March 30th, 1981, chaos ensued, leaving the powers of the presidency in a state of confusion.

Vice President George H.W. Bush could not be reached due to communication issues (he was on a plane).

Secretary of State Alexander Haig incorrectly claimed he was in charge of the federal government – though the House speaker and the Senate’s President Pro Tempore come before the Secretary of State.

Vice President Bush would quietly assume control once his plane landed, however, and Reagan “resumed some of his executive duties and signed a piece of legislation from his hospital bed” the following day.

This confusion about who was really in control of the Executive Branch of course occurred during the height of the Cold War – when the USA and USSR had enough nuclear missiles to kill hundreds of millions of people pointed at each other, and on a hair trigger.

The assassination of John F. Kennedy on November 22nd, 1963, resulted in Lyndon B. Johnson being sworn in as President aboard Air Force One approximately two hours after President Kennedy was shot.

A clearly distraught Jackie Kennedy stood by Johnson’s side.

#TodayInHistory, Nov. 22, 1963: President John F. Kennedy was assassinated in Dallas, Texas. At approx. 2:38 p.m. aboard Air Force One, Vice President Lyndon B. Johnson was sworn in by Judge Sarah Hughes as the 36th #POTUS.

When Woodrow Wilson had a minor stroke in 1919 he became partially paralyzed. In an effort to keep his illness concealed, his wife Edith took the helm.

“She essentially acted as the president, and the country was kept in the dark about Wilson’s true condition until after his term ended in 1921,” History.com writes.

Perhaps more interesting is their explanation of why Wilson’s Vice President did not take control.

“In 1919 the rules of presidential succession in the case of injury weren’t clearly defined.

The 25th amendment wasn’t ratified until 1967, and so Wilson’s administration was operating under Article 2 of the constitution, which provided for a Vice Presidential takeover in the case of ‘death, resignation, or inability to discharge the powers and duties of the said office.’”

“Wilson wasn’t dead and was unwilling to resign under these circumstances, so the Vice President refused to assume the presidency unless Congress passed a resolution declaring the office vacant.”

Thankfully, the 25th Amendment provided more clarity for such a case, as we saw with President George W. Bush.

Now, What Happens if Trump Becomes Too Ill?

Some of the aforementioned cases involve chaos and confusion, something America can ill afford as we already head toward a chaotic and confusing election process.

Technology issues of the past should be relatively moot – Vice President Pence, who incidentally has tested negative for COVID, shouldn’t have trouble receiving a phone call on a plane or anywhere else.

And rules of succession are relatively understood and the 25th Amendment is well-established.

NEW: A White House official tells me President Trump is experiencing “mild symptoms” and is working from the WH Residence: “Business as usual” for Trump, this official says.

In the event that President Trump is unable to carry out his duties as President, the 25th Amendment provides for Vice President Pence to immediately take over.

If something were to happen to Pence that rendered him unable to perform the duties of President, House Speaker Nancy Pelosi would become the Commander-in-Chief.

What About the Election?

However, we are smack in the middle of a presidential campaign, and Election Day is a mere month away.

So what happens if President Trump becomes incapacitated after falling ill from coronavirus and can’t continue his campaign?

If Trump were to become physically unable to run for re-election, the GOP would need to re-nominate someone at an emergency convention.

That person would most likely be Mike Pence, who would then have to select a running mate. The VP running mate would also need to be nominated and accepted by the emergency Republican convention.

There is also an unlikely scenario that Congress could delay the election.

In 2004, the Congressional Research Service (CRS) looked at possible scenarios for election delays in the event of a terrorist attack.

Congress, they concluded, could delegate its power to postpone elections to the president, but it would require a change in federal law approved by both Houses of Congress.

With a Republican-controlled Senate and a Democrat-controlled House, that seems far-fetched.

At this time, there is no reason to believe any of these succession scenarios will occur.

However, if the worst were to happen, America will survive, and thrive. 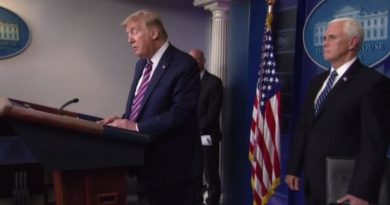