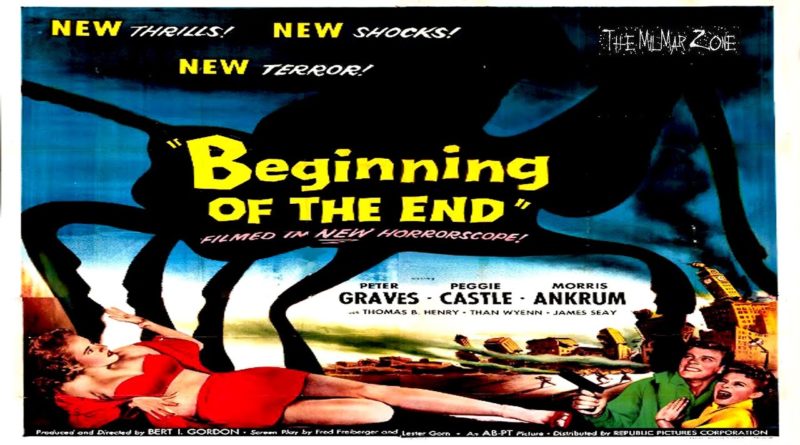 Taglines:
Filmed in New Horrorscope!
So Big…we had to coin a new word for it…NEWMENDOUS!
Never Before …anything to compare it for THRILLS!
You’ll be ROCKED Out of Your Seat…SHOCKED Out of Your Skin!
New thrills! New shocks! New terror!
The screen’s first full-length science-fiction thriller with real live creatures!

Audrey Ames, an enterprising journalist, tries to get the scoop on giant grasshoppers accidentally created at the Illinois State experimental farm. She endeavors to save Chicago, despite a military cover-up. —Anonymous

An experiment involving radioactivity goes wrong, transforming a slew of mild-mannered grasshoppers into gigantic hungry monsters, and a valiant Department of Agriculture official must save the day. This low-budget attempt to replicate the success of Them! features particularly unconvincing special effects.

Synopsis: Spoilers?
A teenage boy and girl making out in a car in the woods near Ludlow, Illinois are attacked and killed. A patrol car happens soon after. While investigators check for foul play, one patrol officer goes into Ludlow to find the male teen’s home. Instead, he finds the entire town destroyed, with nobodies.

The next day, the Illinois National Guard is diverting all traffic away from Ludlow. Reporter Audrey Aimes is diverted, but smells a story and attempts to sneak into town. She’s caught and taken to the local officer in charge. He takes her camera and sends her away. She goes straight to National Guard HQ and talks with Col. Sturgeon. She makes a deal with him to keep quiet in return for getting first dibs when the story is made public.

In the interim, she investigates a destroyed grain storage facility at a secret governmental experimental facility, where she meets Dr. Ed Wainright and his deaf-mute assistant Frank Johnson. After getting the brushoff from Wainright, she heads back to the National Guard where she meets Sturgeon again. He’s just seen the town of Ludlow for himself and tries to back out on his agreement. Finally, he relents and sends Audrey into town to take pictures.

Plot: Spoilers?
The film opens with newspaper photojournalist Audrey Aimes (Peggie Castle) accidentally stumbling upon a small town (Ludlow, Illinois) which has been inexplicably destroyed. All 150 people in the town are missing, and the evidence indicates they are dead. Incredibly, the local fields are also barren, as if a swarm of locusts had eaten all the crops. Aimes suspects that the military is covering something up, and travels to a nearby United States Department of Agriculture experimental farm to learn what creature might have caused the agricultural destruction. She meets Dr. Ed Wainwright (Peter Graves), who is experimenting with radiation as a means of growing gigantic fruits and vegetables to end world hunger. Wainwright reports that there have been a number of mysterious incidents nearby and that locusts have eaten all the radioactive wheat stored in a nearby grain silo.

Gigantic mutant locusts rampage over the countryside. Wainwright and Aimes begin to track down the source of the mysterious occurrences, and quickly discover that the locusts which ate the grain have grown to the size of a city bus. The monsters have eaten all the crops in the area, and now are seeking human beings as a means of sustenance. It is also clear that they are headed for Chicago. Wainwright and Aimes meet with General Hanson (Morris Ankrum), Colonel Sturgeon (Tom Browne Henry), and Captain Barton (James Seay) to strategize a solution. Machine gun and artillery fire seem ineffective against the creatures, and there are far too many to effectively deal with all at once. The United States Army and Illinois National Guard are called upon to help protect the city. But the monsters quickly invade Chicago and begin to feast on human flesh as well as several buildings. 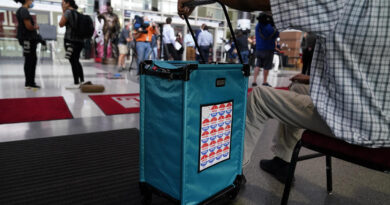 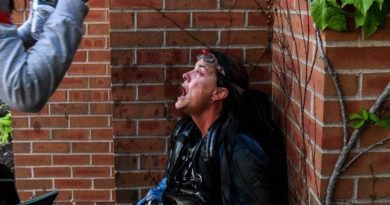 ‘Unacceptable’ attacks on reporters at protests 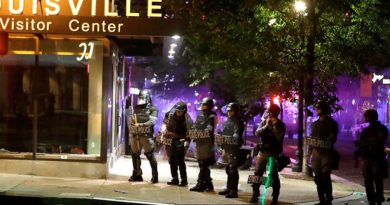