Born in Salzburg, Mozart showed prodigious ability from his earliest childhood. Already competent on keyboard and violin, he composed from the age of five and performed before European royalty. At 17, Mozart was engaged as a musician at the Salzburg court but grew restless and traveled in search of a better position. While visiting Vienna in 1781, he was dismissed from his Salzburg position. He chose to stay in the capital, where he achieved fame but little financial security. During his final years in Vienna, he composed many of his best-known symphonies, concertos, and operas, and portions of the Requiem, which was largely unfinished at the time of his early death at the age of 35. The circumstances of his death have been much mythologized.

He composed more than 600 works, many of which are acknowledged as pinnacles of symphonic, concertante, chamber, operatic, and choral music. He is among the greatest and most enduringly popular of classical composers, and his influence is profound on subsequent Western art music. Ludwig van Beethoven composed his early works in the shadow of Mozart, and Joseph Haydn wrote: “posterity will not see such a talent again in 100 years”.

Wolfgang Amadeus Mozart was born on 27 January 1756 to Leopold Mozart (1719–1787) and Anna Maria, née Pertl (1720–1778), at Getreidegasse 9 in Salzburg. This was the capital of the Archbishopric of Salzburg, an ecclesiastic principality in what is now Austria, then part of the Holy Roman Empire. He was the youngest of seven children, five of whom died in infancy. His elder sister was Maria Anna Mozart (1751–1829), nicknamed “Nannerl”. Mozart was baptized the day after his birth, at St. Rupert’s Cathedral in Salzburg. The baptismal record gives his name in Latinized form, as Joannes Chrysostomus Wolfgangus Theophilus Mozart. He generally called himself “Wolfgang Amadè Mozart” as an adult, but his name had many variants.

Leopold Mozart, a native of Augsburg, then an Imperial Free City in the Holy Roman Empire, was a minor composer and an experienced teacher. In 1743, he was appointed as fourth violinist in the musical establishment of Count Leopold Anton von Firmian, the ruling Prince-Archbishop of Salzburg. Four years later, he married Anna Maria in Salzburg. Leopold became the orchestra’s deputy Kapellmeister in 1763. During the year of his son’s birth, Leopold published a violin textbook, Versuch einer gründlichen Violinschule, which achieved success.

When Nannerl was 7, she began keyboard lessons with her father, while her three-year-old brother looked on. Years later, after her brother’s death, she reminisced:

He often spent much time at the clavier, picking out thirds, which he was ever striking, and his pleasure showed that it sounded good… In the fourth year of his age his father, for a game as it were, began to teach him a few minutes and pieces at the clavier… He could play it faultlessly and with the greatest delicacy, and keeping exactly in time… At the age of five, he was already composing little pieces, which he played to his father who wrote them down.

The Mozart family on tour: Leopold, Wolfgang, and Nannerl. Watercolor by Carmontelle, ca. 1763
These early pieces, K. 1–5, were recorded in the Nannerl Notenbuch. There is some scholarly debate about whether Mozart was four or five years old when he created his first musical compositions, though there is little doubt that Mozart composed his first three pieces of music within a few weeks of each other: K. 1a, 1b, and 1c.

In his early years, Wolfgang’s father was his only teacher. Along with music, he taught his children languages and academic subjects. Solomon notes that, while Leopold was a devoted teacher to his children, there is evidence that Mozart was keen to progress beyond what he was taught. His first ink-spattered composition and his precocious efforts with the violin were of his initiative and came as a surprise to Leopold, who eventually gave up composing when his son’s musical talents became evident. 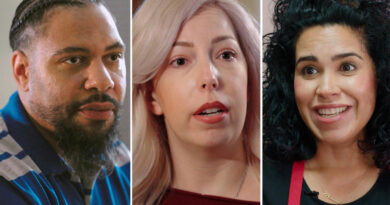 Documentary reveals toll of job losses on and off the Las Vegas Strip: “I cry and pray a whole lot” 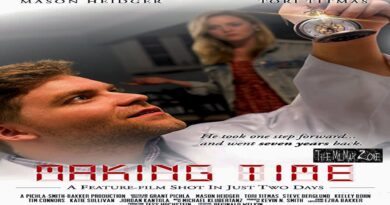