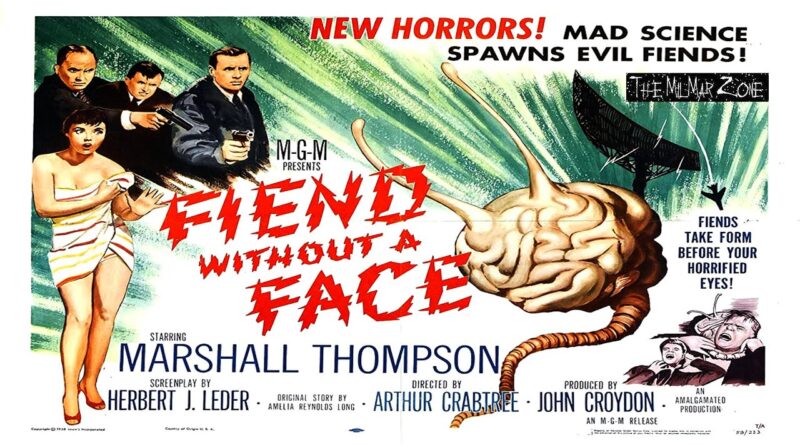 Propelled by their spinal cords, murderous airborne brains fly out in search of food-for-thought after a scientist’s experiment with thought-materialization goes horribly awry in this horror movie with excellent special effects and some genuinely scary moments. It all begins as the scientist, working at an isolated Canadian airbase, experiments on himself. Unfortunately, his atomic invention manifests the researcher’s own evil thoughts which become the terrifyingly real brains that feast messily upon the brains and nervous systems of others.

Synopsis: Spoilers?
All is quiet as night falls at Air Force experimental station 6. A sentry (Sheldon Allan) stops to light a cigarette on his rounds when he hears strange noises coming from the woods. Hearing a scream coming from the woods the sentry runs to investigate. He finds the body of a man his face hideously distorted

Sometime later base security officer Al Chester (Terry Kilburn) and his Commander Major Jeff Cummings (Marshall Thompson) discuss the death. The FBI’s report on the dead man indicates no criminal record of suspect connections. Chester suggests handing over the incident to the local authorities for investigations.

They then check in with Dr. Warren (Gil Winfield) who intended to do an autopsy on the man. Dr. Warren reports Mayor Hawkins (James Dyrenforth) and Dr. Bradley (Peter Madden) from the local county coroners department claimed the body before he could examine it.

Col Butler (Stanley Maxted) calls Cummings to a meeting with Mayor Hawkins and the dead man’s Sister Barbara Griselle (Kim Parker) Griselle and Hawkins point blank refuse to allow the military to conduct the autopsy. Butler then shows Barbara her brother’s diary found where he was killed. Butler demands to know why her brother was keeping meticulous records of flight operations around the base. Griselle is furious at the invasion of privacy and Butlers very selective reading of the diary.

Plot: Spoilers?
U. S. Air Force Interceptor Command Experimental Station No. 6 is a long-range radar installation located in Winthrop, Manitoba, Canada.[Note 1] Unexplained deaths begin to occur in the general area of a farming village near the American base. Postmortems reveal the victims were murdered and the brains and spinal cords are missing from the corpses; the only clue left behind are two puncture marks at the base of each skull. The locals, however, become convinced that radiation leaks from the radar installation’s nuclear-power experiments are the cause of the mysterious deaths.

Air Force Major Jeff Cummings (Thompson) begins an investigation as the local deaths continue, interviewing various townsfolk while looking for anything unusual. Cummings becomes suspicious of Professor R. E. Walgate (Reeves), a retired British scientist living near the airbase; Walgate is in the process of writing another book about his ongoing experiments with telekinesis, this time as it applies to thought projection. Major Cummings’ suspicion of Walgate is later proved to be correct. The scientist finally admits he has not only succeeded in developing his mental ability but in the process created a living thought projection. Unknown to Professor Walgate, the nuclear power radar experiments underway at the nearby U. S. airbase have greatly enhanced his mental abilities to the point that, through him, his living thought projection has become a malevolent and invisible new life form. It escaped from Walgate’s laboratory and is now attacking humans as a means of replicating physical, though still invisible, new versions of itself, all of which are now feeding on the base’s nuclear-generated power. 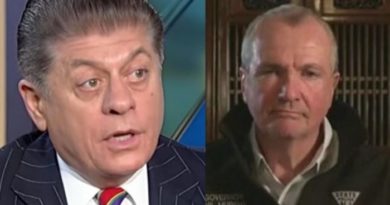 ‘There Is No Pandemic Exception To The Constitution’

WHO reports biggest one-day rise in coronavirus cases to date 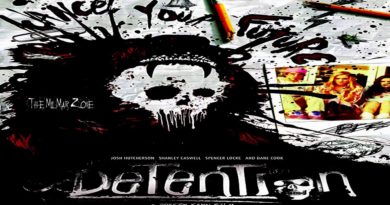