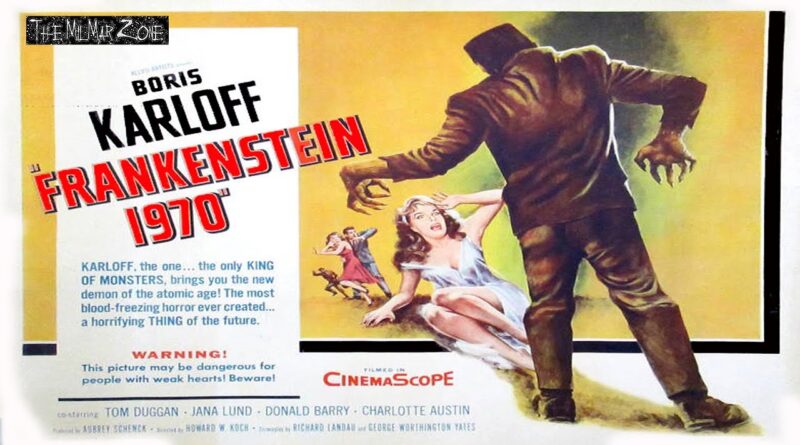 Tagline:
The One…The Only KING OF MONSTERS as the new demon of the atomic age!

Needing money, the last of the Frankensteins leases his castle out to a film company as he tries to complete his ancestor’s gruesome experiments at creating life. —duke1029@aol.com

The baron’s grandson (Boris Karloff) rents the family castle to a TV crew to fund his atomic revival of the family monster.

Synopsis: Spoilers?
Title and credits roll over a mist-covered lake with a tree in the foreground. We open with a woman, Carolyn Hayes (Jana Lund) running towards the camera. She is being chased by a man, Hans Himmler (Mike Lane). She stops, looks back, screams, and then continues running. We only see the man from the waist down as he plods along with a limp. The woman is cornered, now at the same location where the titles and credits were shot. The creature approaches as the woman walks back into the lake. The monster grabs the girl, then holds her underwater. The director, Douglas Row (Don Red Barry) calls, “Cut!” The actor playing the monster does not speak English, so Shuter (Norbert Schiller) must translate. Morgan Haley (John Dennis), the cameraman, confirms that the scene was ok. Doug checks the length of the scene with Judy Stevens (Charlotte Austin). Doug and Judy are divorced and things are still a little frosty in their relationship. He tells her, “Jealousy, jealousy, lover. Don’t blame me because you’re no longer an ingénue. Well, I keep you on the payroll, you’ll have to admit I’m loyal.” She tartly replies, “Oh yes, you’re loyal to wives number one through four inclusive.” Carolyn is helped from the water. She tells Mike Shaw (Tom Duggan) that this movie scene is to celebrate the 230th anniversary of Frankenstein.

Inside the castle, Baron Victor von Frankenstein (Boris Karloff) berates his old friend Wilhelm Gottfried (Rudolph Anders), “How could you inflict these people upon me, Gottfried?” Gottfried reminds the Baron that he agreed to let the film crew use his castle for the money he needed to purchase a reactor for his experiments. He adds, “I’ve been wanting to talk to you about this Victor. You have been spending money and money. You have been buying the equipment as though you were a government.” Gottfried has been handling the Baron’s finances and has sold most of his art treasures. The discussion turns to the past. The Baron was tortured during the past and is bitter and scarred. He sports a long scar that runs from his left eye to the corner of his mouth. It is apparent that his nose was severely broken. He was forced to perform medical experiments. The Baron is the last of the House of Frankenstein. The film cast and crew return to the castle. Doug Row briefs the Baron on his upcoming performance. Doug is pushy and obnoxious.

Plot: Spoilers?
Baron Victor von Frankenstein (Boris Karloff) has suffered torture and disfigurement at the hands of the Nazis as punishment for not cooperating with them during World War II. Horribly disfigured, he nevertheless continues his work as a scientist. Needing funds to support his experiments, the Baron allows a television crew to shoot a made-for-television horror film about his monster-making family at his castle in Germany.

This arrangement gives the Baron enough money to buy an atomic reactor, which he uses to create a living being, modeled after his own likeness before he had been tortured. When the Baron runs out of body parts for his work, however, he proceeds to kill off members of the crew, and even his faithful butler, for more spare parts. Finally, the monster turns on the Baron, and they are both killed in a blast of radioactive steam from the reactor. After the reactor is shut down and the radiation falls to safe levels, the monster’s bandages are removed, and an audiotape is played back in which the Baron reveals that he had intended for the monster to be a perpetuation of himself because he was the last of the Frankenstein family line. 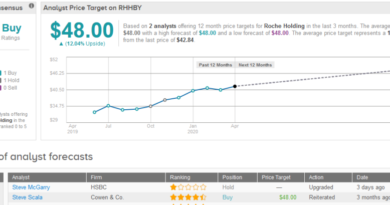 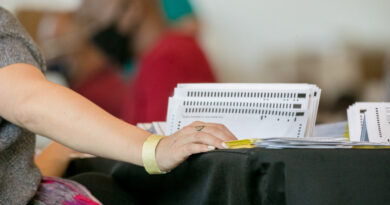 Friday Election Update: What Votes are Left to Count in Trump-Biden Race