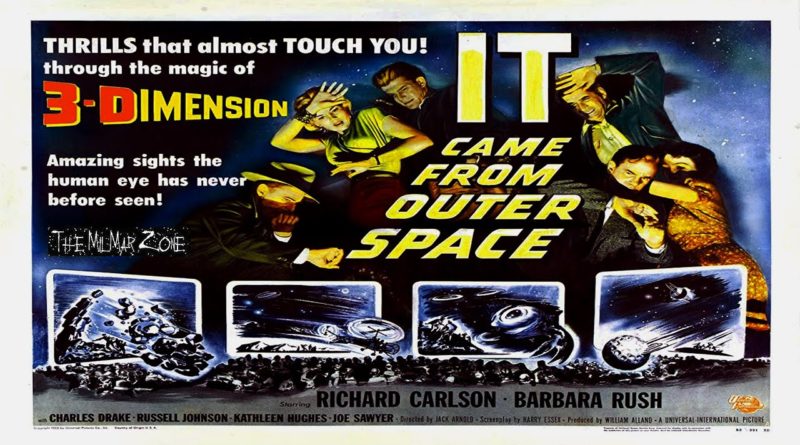 Taglines:
Terror In 3-D… Reaching From The Screen To Seize You In Its Grasp!…
Thrills That Almost Touch You! through the magic of 3-DIMENSION
Amazing sights the human eye has never before seen!
Fantastic sights leap at you!
NOTHING LIKE THIS HAS EVER HAPPENED BEFORE! (original print ad – all caps)
THE OUTER SPACE ROCKETSHIP! THE THUNDERING AVALANCHE! (original ad – all caps)
XENOMORPHS INVADE OUR WORLD! They can look like humans or change to objects of awesome terror!
From Ray Bradbury’s great science fiction story!
Nothing Like This Has Happened to You Before!
What is the awesome secret of the thing from the eye of the Universe?
Exploding from the eye of the universe. It came to rule the world in a kingdom of fear! How can you escape!…from a sight you cannot see!… From a force, you cannot feel!… From a fear, you cannot face it!
The Night the Earth Will NEVER FORGET!
Amazing Sights Leap at You in 3-DIMENSION
Amazing! Exciting! Spectacular!
A helicopter’s churning blades whirl inches from your head!
In scientifically perfected, eye-resting, full sepia Monocolor!

A spaceship from another world crashes in the Arizona desert and only an amateur stargazer and a schoolteacher suspect alien influence when the local townsfolk begin to act strangely. —J. Spurlin

It Came From Outer Space is one of a handful of science fiction films from the 1950s that plays as well today as it did on its original release, despite the fact that its original 3-D elements seem to be lost. It was also the first science fiction effort of director Jack Arnold, and one of three excellent 3-D features that he made (the others were Creature From the Black Lagoon and Revenge of the Creature) during that format’s short-lived history. It was also, along with The Incredible Shrinking Man, one of the two most sophisticated films he ever made in that genre. Additionally, it was Arnold’s first opportunity to use the desert setting that seemed to inspire him in some of his best subsequent movies. Based on a story by Ray Bradbury, the movie starts off in a gentle, lyrical mode, almost reminiscent of +Our Town, as the narrator introduces the tiny Arizona town where the action will take place. Writer John Putnam (Richard Carlson), a new arrival to the town and an amateur astronomer, is looking at the skies with his fiancée, schoolteacher Ellen Fields (Barbara Rush), when they see what looks like a huge meteor crash into the desert. Putnam and Ellen go to the site of the crash and find a huge crater. When he goes down inside, Putnam sees what is very obviously some kind of vehicle or device embedded in the ground, but before he can show it to anyone, a rock slide buries what he saw. MORE: https://www.rottentomatoes.com/m/it_came_from_outer_space

Synopsis: Spoilers?
A fireball streaks across the desert sky and crashes. We see an aerial view of Sand Rock, Arizona in the late evening in the early spring. Inside an isolated ranch house outside of town, we meet John Putnam (Richard Carlson) and his girlfriend Ellen Fields (Barbara Rush). He is an amateur astronomer, she the local school teacher. They sit in front of a fire in his partially completed home enjoying a cup of coffee. They walk outside to take in the night air when they spot the “meteor” from the opening shot.

Plot: Spoilers?
Author and amateur astronomer John Putnam (Richard Carlson) and schoolteacher Ellen Fields (Barbara Rush) watch a large meteorite crash near the small town of Sand Rock, Arizona. They awaken a neighbor, who has a helicopter, and all three fly to the crash site. Putnam climbs down into the crater and notices a partially buried round object in the crater’s pit. He comes to the realization, after he sees a six-sided hatchway close, that this isn’t a meteorite but a large alien spaceship. The hatchway’s noise starts a landslide that completely buries the craft. Putnam’s story is later scoffed at by Sand Rock’s sheriff (Charles Drake) and the local news media. 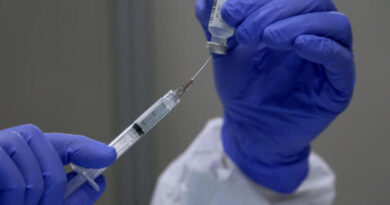 How the Pfizer-BioNTech COVID-19 vaccine was developed 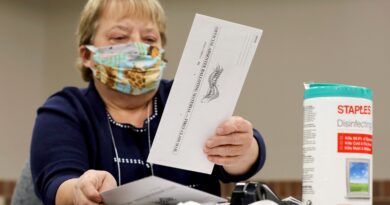 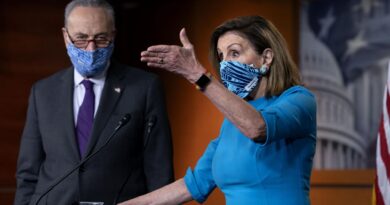 Congressional leaders near deal on COVID bill with stimulus checks