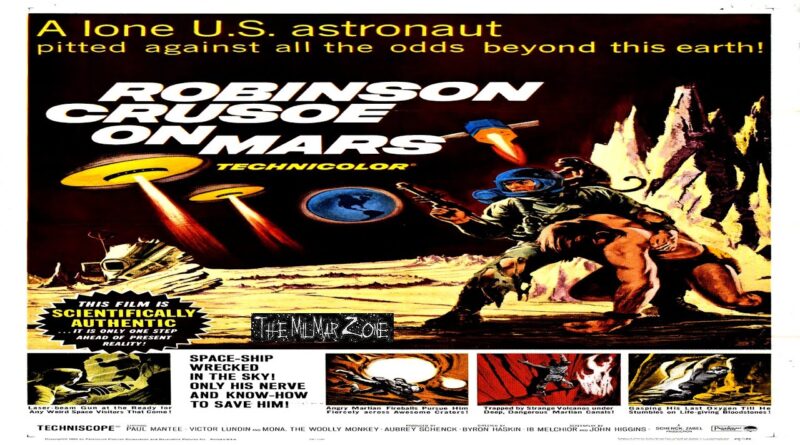 Taglines:
A Lone U.S. Astronaut Space-Ship Wrecked on Mars!
The incredible adventures of a LONE U.S. ASTRONAUT!
One U.S. astronaut pitted against all the odds beyond this earth!

Stranded on Mars with only a monkey as a companion, an astronaut must figure out how to find oxygen, water, and food on the lifeless planet. —Blue Dragon (movies@sharyl.mailstop.com)

During a flight to Mars in the spaceship Mars Gravity Probe 1, Commander Christopher ‘Kit’ Draper and Colonel Dan McReady are forced to deviate from an asteroid and they leave their spacecraft in pods. Draper lands on the surface of the Red Planet and survives. He learns how to produce oxygen and while exploring the planet, he finds McReady dead in his crashed pod. He finds also the monkey Mona and brings the animal to the cave where he is sheltered. He learns that he can breathe the Martian air for short periods but needs also oxygen. But Mona finds water and an edible plant in the underground. .After a long period alone, Draper feels the loneliness. One day, he sees a spacecraft landing on Mars and he believes it might be the rescue team to save him. But he finds aliens working on the planet and some of them are slaves. One of them flees and stumble with Draper and he names him Friday. Now he needs to find a way to be rescued and return to Earth. —Claudio Carvalho, Rio de Janeiro, Brazil

Commander Kit Draper and Colonel Dan McReady are orbiting Mars in an exploratory surveyor. A malfunction forces them to eject with only Draper and a monkey named Mona surviving. Draper must learn to survive in this hostile environment fighting thirst, hunger, and even hostile aliens if he expects to see home again.

This film is an adaptation of Daniel Defoe’s classic tale of a sailor stranded on a deserted island. In this version, Crusoe is an astronaut who crash-lands on the seemingly-abandoned planet of Mars. Soon, he meets Friday, who is an alien slave who recently escaped from his captors.

Plot: Spoilers?
Commander Christopher “Kit” Draper, USN, and Colonel Dan McReady, USAF reach the Red Planet in their spaceship, Mars Gravity Probe 1. They are forced to use up their remaining fuel in order to avoid an imminent collision with a large orbiting meteoroid; they descend in their one-man lifeboat pods, becoming the first humans on Mars.

Draper eventually finds a rock face cave for shelter. He figures out how to obtain the rest of what he needs to survive: he burns some coal-like rocks for warmth and discovers that heating them also releases oxygen. This allows him to refill his air tanks with a hand pump and to move around in the thin Martian atmosphere. On one of his excursions, he finds McReady’s crashed pod and a dead body.

He also finds their monkey Mona alive. Later, he notices that Mona keeps disappearing and is uninterested in their dwindling supply of food and water. He gives her a salty cracker, but no water. When Mona gets thirsty, he lets her out and follows her to a cave where he finds a pool of water in which edible plant “sausages” grow.

As the days grow into months, Draper slowly begins to crack from the prolonged isolation, at one point imagining an alive, but unspeaking, McReady appearing in his cave. He also watches helplessly as his mothership, an inaccessible “supermarket”, periodically orbits overhead; without fuel, the spaceship cannot respond to his radioed order to land.

While walking about, Draper comes upon a dark rock slab standing almost upright. Curious, he digs in the ground around it, exposing a skeletal hand and arm wearing a black bracelet. He uncovers the rest of the humanoid skeleton and determines that the alien was murdered; the front of the skull shows a hole, and the back shows heavy charring. To hide his presence on Mars, Draper signals his low-orbiting mothership to self-destruct on its next overhead pass. 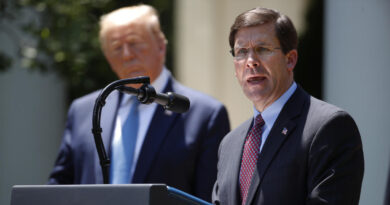 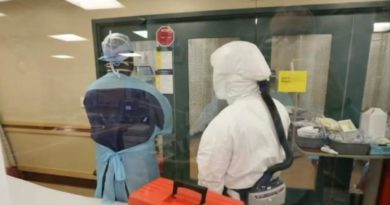 Iran slams interception by US jet over Syria as ‘illegal’