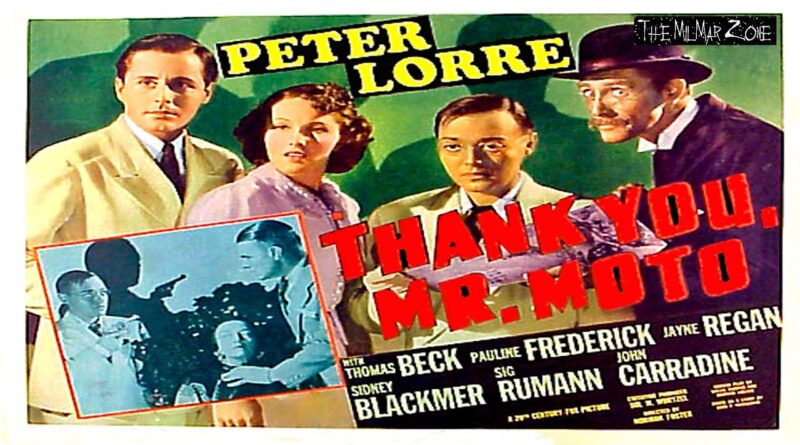 Taglines:
Mystery in China!
Audiences know when Moto appears something exciting is about to happen.
The rare 1937 Mr. Moto classic!
INTRIGUE OF THE ORIENT!

Seven maps, when found and put together, reveal the location of the treasures of Genghis Khan. —Ed Stephan (stephan@henson.cc.wwu.edu)

Mr. Moto competes with a gang of ruthless treasure-hunters for possession of seven scrolls which, when brought together, form a map that reveals the location of the tomb of Genghis Khan, reputed to contain fabulous treasure. Moto already has one scroll, but the rest are owned by Prince Chung and his mother, who consider it a sacred duty to their ancestors to protect the scrolls and the secret of the Khan’s tomb. —Daniel Frankham (danielf@my-Deja.com)

Mr. Moto finds himself in Peiping seeking ancient scrolls that, placed together, will form a map to the location of Genghis Khan’s long-hidden treasure. There are a total of seven scrolls and Moto himself has recently acquired one of these during a foray into Mongolia. The remaining six scrolls are in the possession of Madame Chung and her son, Prince Chung. They very much want to protect the dignity and honor of their ancestors and with Moto’s help, try to keep thieves, led by Colonel Tchernov, from getting their hands on the map. —garykmcd

The Japanese detective (Peter Lorre) keeps smugglers from getting the treasures of Khan.

Plot: Spoiler?
A caravan settles for the night in the Gobi Desert. A man sneaks into a tent to steal a scroll, but adventurer and soldier of fortune Kentaro Moto (Peter Lorre) are only pretending to be asleep and kills him. When the caravan reaches Peiping, Moto is searched by the police. The scroll is found, but Moto grabs it and escapes.

He changes clothes and accepts an invitation to a party hosted by Colonel Tchernov (Sig Rumann) in honor of American Eleanor Joyce (Jayne Regan). At the soirée, Moto observes a guest, Chinese Prince Chung (Philip Ahn) leaving his mother to speak privately with Tchernov in another room. Tchernov offers to buy certain family heirloom scrolls from Chung. When Chung refuses to part with them, Tchernov draws a pistol, then is killed (off-screen) by Moto. Joyce stumbles upon the scene and watches in disbelief as Moto calmly stages it to look like a suicide. Moto politely advises her to say nothing to avoid an international incident.

Later, as a favor to his rescuer, Chung grants Moto’s request to see the scrolls. Chung informs him that the seven scrolls give directions to the lost grave of Genghis Khan. The Chungs are determined to see that it and its fabulous treasures remain undisturbed. However, one scroll was lent to an exhibition and was stolen.

A dealer in antiquities, Pereira (John Carradine), shows Joyce some wares. She is interested in a (fake) scroll, but the price is too high. While shopping the next day with smitten diplomat Tom Nelson (Thomas Beck), they see Moto entering Pereira’s shop. Moto gets Pereira to confess that he stole the authentic scroll, but before he can obtain more information, Pereira is shot and killed by a gunman in a car that speeds away.

Moto returns to his apartment to find it ransacked. Sensing that the would-be thief is present, Moto leaves his gun lying around. Schneider (Wilhelm von Brincken) holds him at gunpoint and forces Moto to give him the scroll. When Moto tries to flee, Schneider shoots several times with Moto’s gun. However, the gun was filled with blanks; Moto trails Schneider to Madame Tchernov (Nedda Harrigan). When they leave to rendezvous with their gang, Moto starts to follow but is knocked out by the butler, Ivan (John Bleifer), another crook. Joyce, who had been comforting the widow, is taken, hostage.

The arch-villain (and Madame Tchernov’s lover), Herr Koerger (Sidney Blackmer), forces Prince Chung to reveal the location of the scrolls by striking his mother.