Taglines:
The Thing That Could Destroy the Earth!
Out of This Universe!
Invisible X-Ray Horror, here to spy on the Earth!
Is it True? Are Creatures from Space watching us NOW?
Ghost creature from space!

Aspherical UFO proves to contain one alien visitor. How to deal with him? Investigators disagree…

A large, spherical flying saucer lands on Earth and an extraterrestrial emerges bearing a message of peace and nuclear disarmament. This sci-fi adventure, a clear imitation of The Day the Earth Stood Still, shows the conflicts that soon arise surrounding the alien and his message.

Synopsis: Spoilers
The movie opens with the title and credits shown over a picture of a spiral galaxy. We zoom in on a picture of Earth, the Long Beach, California Harbor, and then other pictures of the Los Angeles area. At a military base, a radar operator (John Erman) picks something up on his screen and reports to Colonel Matthews (Paul Langton). The area of probable impact is Oak Ridge. General Knowland (Herbert Lytton) enters the room and tells Matthews, “Air Defense Command says the bogey has been picked up all around the globe today. Washington wants us to keep a close check on it.” Matthews is amused at the possibility of a UFO, and explains, “I think we will find it as some kind of light aberration or temperature inversion. It has happened before.” The General suggests consultation with Pacific Tech, but Matthews disagrees. He wants to keep things in-house. A phone call indicates something reported by the Forest Service up by Bear Lake. Knowland sends Matthews to investigate. Knowland calls Pacific Tech and talks to Dr. Karl Sorenson (Bruce Bennett). He asks Sorenson to investigate. Sorenson leaves his office (Griffith Park Observatory) and drives to the canyon.

Bill, the park ranger (Harry Fleer), Matthews, and Sgt. Gray (Lyn Osborn) arrives, Sorenson’s car is spotted. Bill explains that it is probably one of Pacific Tech’s projects. He says the object is in the canyon. The three men walk into the canyon. There it is–a large sphere, white in color and suspended in the air. It casts a shadow on the ground beneath it. The three men descend into the canyon to get a closer look at the object. Bill hears a ticking sound and looks around for the source. Sorenson walks away from a cave holding a Geiger counter and introduces himself to Matthews. He reports there is some radiation but not a type he has identified. Sorenson taps the object and concludes the object is not metal, perhaps glass. Matthews orders Sgt. Gray to go back to the car and order an armed detail to be sent immediately. Matthews orders Bill to keep quiet about the object. Matthews is intrigued by the ability the object possesses to defy gravity. He notes, “Knowledge of what makes this thing work could be the greatest military weapon of all time. Space supremacy could be ours overnight.” Sorenson reminds Matthews that there are two kinds of power: constructive and destructive. It is clear that Sorenson and Matthews fundamentally disagree on the approach and are developing a dislike for each other.

Plot: Spoilers?
The United States Air Force (USAF) tracks an unidentified flying object (UFO) as it passes over the village of Oak Ridge, California at a speed of 180,000 mph (292,500 km/h). The UFO, a white sphere, comes to rest in Stone Canyon outside of Oak Ridge, floating approximately 6 feet (1.8 meters) above the ground. Both USAF Col. Matthews (Paul Langton) and Dr. Karl Sorenson (Bennett), an astrophysicist at the nearby Pacific Institute of Technology (PIT), are called to the scene.

Kathy Grant (Greene), a widow whose fighter pilot husband died in the Korean War, runs a tourist lodge near the canyon and also arrives. With her is her young son Ken (Scotty Morrow), who uses a wheelchair due to an unnamed terminal disease. Ken looks up to Sorenson as a hero, not Matthews. 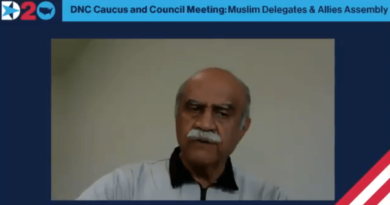 DNC Moderator Skips ‘Under God’ During Pledge Of Allegiance

Stocks may continue to struggle Thanksgiving week amid Covid-19 outbreaks