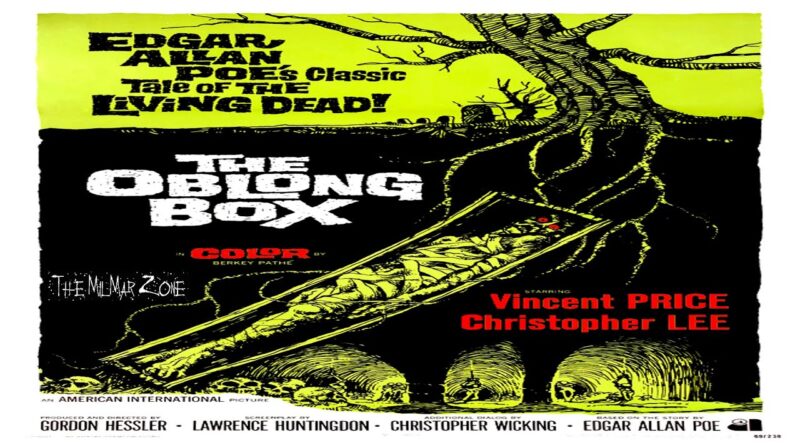 Julian (Vincent Price) hides his horrendously disfigured brother, Sir Edward Markham (Alister Williamson), in a tower where he is kept in chains. Anxious for freedom, Edward fakes his death with the aid of an immoral attorney, Trench (Peter Arne), and a pill that puts him into a catatonic state. But the escape plan takes a treacherous turn when Julian unwittingly buries his brother alive — and he’s later unearthed by grave robbers under the employ of malevolent Dr. Neuhardt (Christopher Lee).

Plot: Spoilers?
The film takes place in England in 1865. Having been grotesquely disfigured in an African voodoo ceremony for a transgression against the native populace, Sir Edward Markham (Alister Williamson) is kept locked in his room by his guilt-ridden brother, Julian (Vincent Price).

Tiring of his captivity, Sir Edward plots to escape by faking his death. With the help of the crooked family lawyer, Trench (Peter Arne), they hire witchdoctor N’Galo (Harry Baird) to concoct a drug to put Sir Edward into a deathlike trance. Before Trench has time to act, Julian finds his “dead” brother and puts him in a coffin (the title’s “oblong box”). Embarrassed by his brother’s appearance, Julian asks Trench to find a proxy body for Sir Edward’s lying in state. Trench and N’Galo murder landlord Tom Hacket (Maxwell Shaw) and offer his corpse to Julian. After the wake, Trench and his young companion Norton (Carl Rigg), dispose of Hacket’s body in a nearby river, while Julian has Sir Edward buried. Now free of his brother, Julian marries his young fiancée, Elizabeth (Hilary Dwyer), while Trench, Norton, and N’Galo go their separate ways.

Sir Edward is left buried alive until he is dug up by graverobbers and delivered to Dr. Newhartt (Christopher Lee). Newhartt opens the coffin and is confronted by the resurrected Sir Edward. With his first-hand knowledge of Newhartt’s illegal activities, Sir Edward blackmails the doctor into sheltering him. Sir Edward then conceals his face behind a crimson hood and embarks on a vengeful killing spree.

Norton is first on Sir Edward’s list and has his throat slit. In between killings, Sir Edward finds time to romance Newhartt’s maid Sally (Sally Geeson), but when Newhartt finds out about their affair, he discharges Sally and she goes to work for Julian. While searching for Trench, he is sidetracked by a couple of drunks who drag him into a nearby tavern. Here he ends up with prostitute Heidi (Uta Levka), who tries to roll him for his money, only to be killed by Sir Edward’s knife. The police get involved, and the hunt is on for a killer in a crimson hood.

Meanwhile, Julian has become suspicious about the body which Trench supplied to him after his friend Kemp (Rupert Davies) finds it washed up on a riverbank. Julian confronts Trench, who tells him the truth about Sir Edward’s “death”. Soon after, Trench is dispatched by Sir Edward, but not before he tells him the whereabouts of N’Galo. Hoping he will cure him of his disfigurement, Sir Edward asks N’Galo for his help.

‘We do have further headroom,’ deputy Bank of England governor says