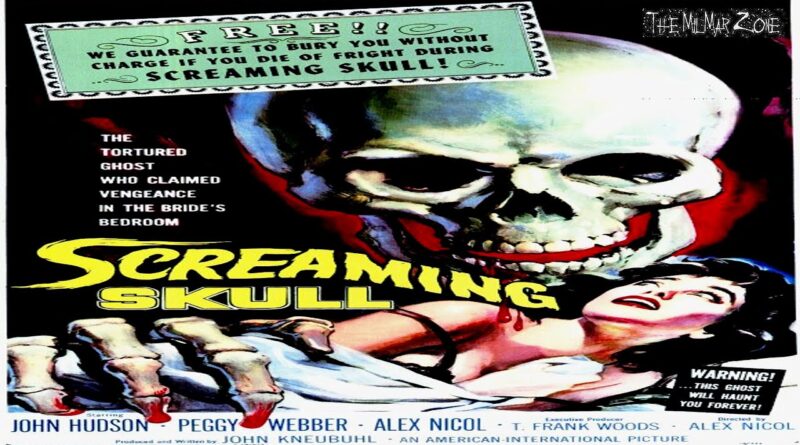 Taglines:
FREE!! We guarantee to bury you without charge if you die of fright during SCREAMING SKULL!
WARNING!… This Ghost Will Haunt You Forever!
The tortured ghost who claims vengeance in the bride’s bedroom!
Free coffin if you don’t DIE OF FRIGHT!

A newly married couple arrives at the home of the husband’s late wife, where the gardens have been maintained by a gardener faithful to the dead woman’s memory. Soon, eerie events lead the new wife to think she’s losing her mind. —Erewhon

Newlyweds Eric and Jenni Whitlock retire to his desolate mansion, where Eric’s first wife Marianne died from a mysterious freak accident. Jenni, who has a history of mental illness, begins to see strange things including a mysterious skull, which may or may not be a product of her imagination. Suspicion falls on Mickey, the estate’s mentally challenged gardener, who was seemingly was very attached to his former mistress. —Gabe Taverney (duke1029@aol.com)

Synopsis: Spoiler?
Eric and Jenni Whitlock arrive at the stately home that he shared with his former wife to ostensibly recapture his happiness and reinvigorate the abandoned home. Eric’s new wife, Jenni is a sensitive and impressionable person who needs encouragement and companionship. They appear to be very much in love and Eric declares his desire to share his life with her and put his past behind him. Jenni is introduced to Mickey, the simpleton Gardner, who was devoted to Eric’s first wife, Marriane and we learn that Marriane was accidentally drowned in the pond on the property. Jenni encounters Reverand Snow and his wife who have come to celebrate Eric’s return and meet the new woman of the house. Jenni shares with the Reverand that her own parents died of drowning and she clearly has never recovered from their death. When Eric leaves Jenni at home alone while he is traveling for work, she encounters the strange sounds of the old house from blowing wind to the eerie cry of the peacocks that inhabit the garden. She is clearly on edge and when Eric returns he assures her that everything is fine. Jenni reaches out to Mickey to comfort him and try to build a relationship and has some success when she helps him find flowers for Marriane’s monument.

Plot:
Over a scene of an opening coffin, a narrator explains that the film’s climax is so terrifying that it may kill the viewer while reassuring the audience that should they die of fright they will receive a free burial service. Inside the coffin is a card that reads “Reserved for You”.[5]

Newlyweds Jenni (Peggy Webber) and Eric (John Hudson) move into Eric’s palatial country home. Jenni is Eric’s second wife; his first wife Marion died when she accidentally slipped and hit her head on the edge of a decorative pond on the estate. At the home, they meet Eric’s friends, the Reverend Snow (Russ Conway) and his wife (Tony Johnson), as well as Mickey (Alex Nicol), the developmentally disabled gardener. Eric privately mentions to the Snows that Jenni spent time in an asylum following the sudden death of both her parents and Mrs. Snow reveals that Jenni is very wealthy.

Jenni is disturbed both by Mickey’s belief that Marion’s ghost wanders the estate and by Marion’s self-portrait inside the house, which Jenni believes resembles her mother. When she begins to hear unexplained screaming noises and see skulls around her house, she believes that Marion is haunting her. Though Eric speculates to Jenni that Mickey, who was a childhood friend of Marion and thus dislikes Jenni, may be behind the trickery, Jenni worries that she is going insane. Eric suggests removing Marion’s self-portrait from the home. Eric and Jenni take the painting outside and burn it, later uncovering a skull from the ashes. Jenni panics at the sight of the skull, but Eric denies that the skull is there. Jenni faints and Eric withdraws the skull and hides it, revealing that he has been gaslighting her all along. 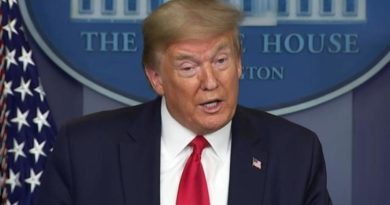 Trump: “The governors are responsible for testing” 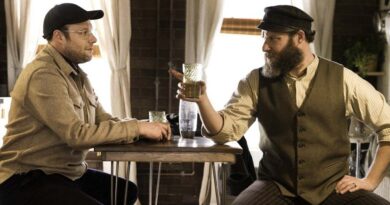