Taglines:
The Battle for Power Has Begun
Conquerors from a Dying World Invade Earth!
A Science-Fiction Thriller!
They turn women into robots … enslave men … and make cities into places of terror!
These creatures use their powers to possess and then use humans as slaves!

Scientists investigating an unusual meteor shower in a rural field are possessed by an alien force bent on an ulterior purpose. —duke1029

An alien spaceship crash-lands on the moon, and soon afterward the extraterrestrials have taken over the minds of a number of Earth’s top scientists. This sci-fi drama follows the attempts of one scientist, who happens to be immune to their powers, to free his colleagues and protect the world.

Synopsis: Spoilers?
In a rural part of England, a flurry of what seems to be meteors hits the earth and government scientists are interested because the things landed in perfect formation. Initially, Dr. Curtis Temple (Robert Hutton) is pressed into service to examine the things but when he is restricted because of a metal plate recently placed in his skull due to an auto accident, his gal pal and right-hand person Lee Mason (Jennifer Jayne) is sent in to investigate and gather research information about the space rocks. When an attempt is made to break open one of the rocks, the group of scientists is knocked silly and become ultimately possessed by some alien mentality that motivates them to build a large compound where they can launch a rocket to the moon. When Curtis is prevented from entering and shunned by a body that appears to be his girlfriend Lee, he gets help from a scientist friend and they manage to make some home-made instruments that allow them into the world of the alien visitors.

Plot: Spoilers?
An unusual V-shaped formation of meteorites has fallen in Cornwall. A group of scientists is appointed to investigate, but its head, Dr. Curtis Temple (Hutton), is forbidden by his physician from going as Curtis is recovering from an automobile accident and has a silver plate in his skull. He turns the mission over to Lee Mason (Jayne), his colleague and lover.

When the scientists arrive at the site, they find the meteorites to be unusual in shape and color—they’re rather pointy and blue. And they house aliens who exist as ‘pure energy’. A geologist attempts to chisel off a piece of meteorite, but as soon as he strikes it, it emits a blinding flash of light and a high-pitched screech as the aliens take over the scientists’ bodies and minds.

Concerned that the only contact with Lee has been her requisitions for millions of pounds’ worth of equipment—including weapons—Curtis decides to visit the site despite his MD’s orders. But before he leaves, a fellow scientist (Geoffrey Wallace) determines that the meteorites have, surprisingly, come from the moon.

Upon arrival, Curtis finds that the site resembles a military post, with armed guards and a 10,000-volt electric security fence. Lee herself bars him from entering.

An agent from ‘Internal Security’ has been tailing Curtis but must phone his superiors for permission to give Curtis a full situation report. He enters a phone box to place the call, then suddenly stumbles out, covered with red spots, and falls dying to the ground. A small crowd gathers. A doctor steps forward, but after touching the agent, he too dies. Then each member of the crowd succumbs. The press dramatically dubs this unknown disease ‘The Crimson Plague’. A television commentator assures viewers that although no cause or cure has been discovered, the authorities have developed a secret method of safely disposing of the victims’ bodies.

After watching a night-time rocket launch from the site, Curtis decides to prevent another launch. A crack shot, he returns the next day with a sniper rifle and destroys the generator that supplies power to the camp, thus stopping the second launch. He climbs over the now-deactivated electric fence into the site. 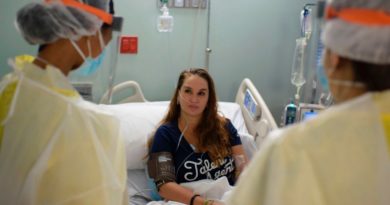 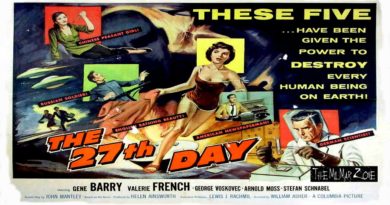