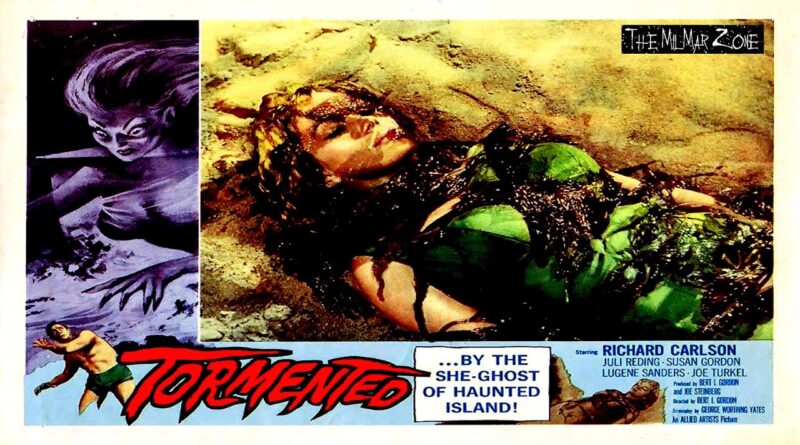 Taglines:
A ghost-woman owned him body and soul!
The Wedding of the Living And the Dead!
Her lips, cold as a tomb! Her caress, a naked chill!
Tormented by the She-Ghost of Haunted Island!
A Terrifying Story of Supernatural Passion!

A man lets a former flame fall to her death rather than let her interfere with his new relationship, but her ghost returns to disrupt his impending nuptials. —Shannon Patrick Sullivan (shannon@mun.ca)

A jazz pianist (Richard Carlson) is haunted by his dead ex-lover’s (Juli Reding) crawling hand and a floating head.

Synopsis: Spoilers?
Tom Stewart is a successful Jazz musician who has retreated to a small island where he intends to marry a girl named Meg Hubbard. However, trouble presents itself when Tom’s old flame, Vi Mason shows up looking for him. Tom quickly takes Vi to the old lighthouse on the island. Tom explains that it’s over between them, but Vi claims that she intends to blackmail Tom if she can’t have him. However, as they go to the top of the lighthouse, the railing gives way, and Vi hangs from it, pleading for Tom to save her. However, he refuses to, and she plunges into the waters below.

The next day, Tom goes down to the beach and sees Vi’s body floating out on the water. Swimming out to it and returning it to the beach, Tom is shocked when it then turns to seaweed before his very eyes! Meg’s little sister Sandy shows up shortly after wondering what Tom is doing. As he requests she leaves, something in the sand catches her eye. It appears to be a watch inscribed with the name ‘Vi.’ Tom takes the watch from Sandy, and once she leaves, he throws it back into the ocean, claiming that’s the end of Vi.

Tom returns to the lighthouse, where Meg eventually finds him. As they hug, Meg swears she smell perfume. Tom quickly ushers her out of the lighthouse down to the beach. However, as they talk, Tom swears he sees footprints in the sand following them. Meg sees nothing and is surprised when Tom suggests they return to the mainland to get married. Meg refuses to do so, claiming that this would upset her parents.

Plot: Spoilers?
Jazz pianist Tom Stewart (Carlson), who lives in a Cape Cod island community, is preparing to marry his fiancée Meg Hubbard (Lugene Sanders). Shortly before the wedding, Tom’s old girlfriend Vi Mason (Juli Reding) visits and informs him that she will end his relationship with Meg, using blackmail if necessary. While she is arguing with him atop a lighthouse, the railing she is leaning on gives way. She manages to hang on briefly, but Tom refuses to help and watches her fall to her death.

The next day, Tom sees Vi’s body floating in the water. After he retrieves her, the body turns into seaweed. He tries to forget what he has seen, but over the next few days, Vi’s watch washes up on the beach, strange footprints appear in the sand, Vi’s ghost appears and tells Tom that she will haunt him for the rest of his life, and when Meg’s little sister Sandy (Susan Gordon) asks to see the wedding ring Tom will give Meg, a disembodied hand makes off with it.

Soon afterward, during a party for Tom and Meg, Vi’s disembodied head appears in a photo a guest takes of the couple. Later, when Tom’s alone, Vi taunts him that she will now use her voice to tell the world how Tom Stewart killed her.

To add to Tom’s dilemma, a ferry-driving beatnik comes looking for Tom, intent on collecting the $5.00 Vi owes him for her trip to the island. Tom’s haste to pay the fellow off causes the shifty man to stick around, and his attempts to blackmail Tom lead to his death. Unbeknownst to Tom, Sandy has inadvertently witnessed the murder.

Sandy keeps quiet about what she has seen. At the wedding, she almost speaks up at the point in the ceremony where the minister asks if anyone objects to the marriage, but before she can speak, the church’s front doors burst open and cause the flowers all to wilt as the candles to die out, bringing the ceremony to an abrupt, unpleasant halt. 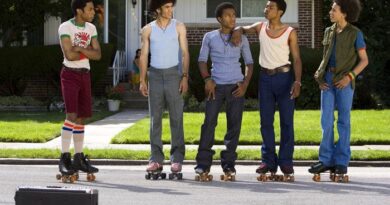 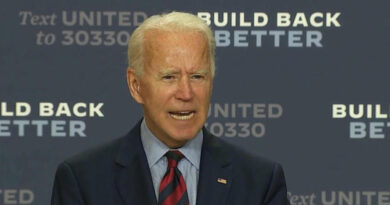 Polls show Americans learning toward Biden on issues that worry them 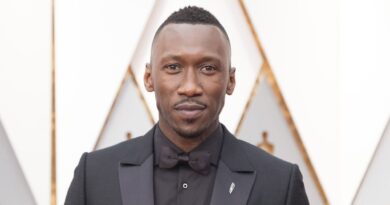