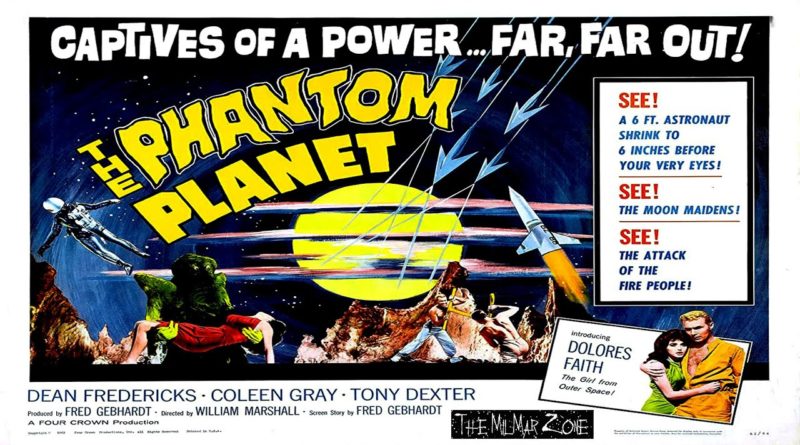 Taglines:
Captives of power far, far out!
It Begins Where Others End! On the Moon!
Science Shocker of the Space Age.
See!! A 6 ft. astronaut shrink to 6 inches before your very eyes! See!! The Moon Maidens! See!! The attack of the Fire People! Staring DOLORES FAITH the Girl from Outer Space!

After an invisible asteroid draws an astronaut and his ship to its surface, he is miniaturized by the phantom planet’s exotic atmosphere. —Gabe Taverney (duke1029@aol.com)

The mysterious appearance of an unknown planet brings miniature people, a monster, beautiful women, and undaunted heroes to the screen. The self-contained planet “Rheton” has the ability to move in and out of galaxies to escape their enemies. After two missing expeditions, Earth sends a third astronaut team to investigate. One astronaut survives a crash to stand trial and help the aliens fight off a monster after a Solorite attack. —Anonymous/revised by statmanjeff

In this off-beat sci-fi adventure, an astronaut must make a forced landing upon a remote asteroid. His ship is damaged, and he must breathe the planet’s atmosphere. Soon he begins shrinking and once he gets down to six inches discovers the place populated by diminutive people.

Plot: Spoilers?
In 1980, the United States Air Force’s Space Exploration Wing has based on the Moon, and it is on the eve of a mission to Mars. When another of its two-member crew Pegasus spacecraft mysteriously disappears, rumors begin circulating of space monsters and phantom planets. Captain Frank Chapman and his navigator Lt. Ray Makonnen are ordered to investigate.

During the search, their spaceship suffers damage from a meteor shower, requiring that both men go outside to make repairs. A bullet-sized particle, however, pierces the air hose on Chapman’s spacesuit, rendering him unconscious. Makonnen is able to repair the hose, but as he opens the airlock hatch, he is fatally struck by a similar particle. Makonnen’s last act before being propelled into deep space is to push Chapman inside and close the airlock hatch. Chapman comes to and finds Makonnen has gone and himself unable to communicate with the lunar base. He records a log entry about the preceding events, noting that he now must make a forced landing on an asteroid, that it is somehow pulling in his Pegasus spaceship.

Exiting his ship while still feeling the effects of the accident, Chapman collapses and sees tiny humanoids about six inches tall approaching. Once his helmet visor is opened, he can breathe but shrinks to their size due to the asteroid’s atmosphere. He is taken underground.

Sesom, the aged and wise ruler of Rheton (the native name for the rocky and seemingly lifeless planetoid where Chapman has landed), explains that though his craft was brought down safely by their gravitational tractor beam, they had not been able to do same with the preceding Earth spaceships that came near, which were completely destroyed, along with their crews, when they crashed on Rheton’s surface. He informs Chapman that he never can leave but will have all the rights of a citizen of Rheton. As he slept, Chapman’s spaceship was sent into space to keep Rheton’s existence a secret, and more importantly, their world’s gravitational technology, which allows the Rhetonians to navigate their world through space.

Chapman meets two beautiful women: Sesom’s smugly spoiled blond daughter Liara and the gentle but mute black-haired Zetha. Liara is more than willing to answer his many questions about Rheton. Sesom informs Chapman that he later may marry one of the women once he has become accustomed to living on Rheton.

Liara, after following and engaging constantly with Chapman, declares her love for him, but Chapman, still eager to return to his own people, quietly rejects her. Herron, a young man who is in love with Liara, attempts to win her for himself by lying to Sesom, telling him Chapman is attempting to win over both women. 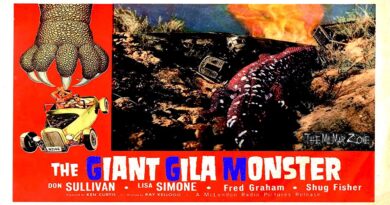 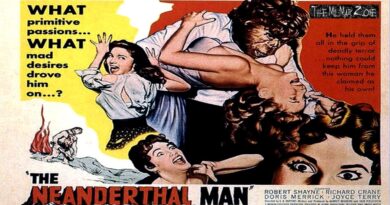 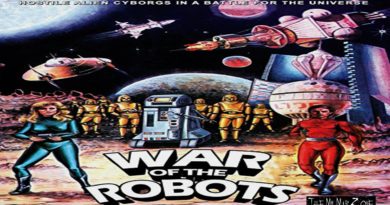 War of the Robots 1978 — A Full-Length Science Fiction Movie