President Trump took to the podium Sunday hours after a bombshell New York Times report alleged he only paid $750 in federal income taxes in 2017, the year he took office. Mr. Trump insisted the report was “fake news” and “made up,” but again claimed he cannot release them because he is under audit, although an audit does not stop him from releasing them publicly.

“Actually I paid the tax, and you’ll see them as soon as my tax returns are done,” Mr. Trump said. “It’s under audit. They’ve been under audit for a long time. The IRS does not treat me well … But they’re under audit and when they’re not, I’ll be proud to show you. That’s just fake news. The New York Times tried it — same thing. They tried to create a little bit of a story. They’re doing anything they can. The stories I read, they are so fake, they are so phony.”

Mr. Trump said he did not know the story would be coming out on Sunday, but said he had heard there might be a negative story coming out. He called Sunday’s press conference only hours before the Times’ report was published without a stated reason for calling the press conference.

When pressed directly on how much he paid in 2016 and 2017, Mr. Trump said he “paid a lot,” claiming he paid a fair amount in “state taxes” in New York. Earlier this year, Mr. Trump changed his primary residence to Mar-a-Lago in Florida, alleging he had paid millions in “city, state and local taxes.”

The tax documents do not “reveal any previously unreported connections to Russia.” The Times said the documents show millions in revenue from endorsements and licensing deals, as well as some real estate ventures, paired with massive investments in golf courses that produced sizable losses.

CBS News has not verified the information reported by the Times.

Mr. Trump kicked off the news conference talking about his Supreme Court pick, Amy Coney Barrett, alleging she has been under attack by Democrats and The New York Times for her Catholic faith.

Mr. Trump on Saturday announced Barrett as his pick for Ruth Bader Ginsburg’s vacated seat on the Supreme Court. Barrett, who is currently a judge on the 7th Circuit Court of Appeals, is likely to face a swift but contentious confirmation battle in the Senate. Lindsey Graham, the Senate Judiciary Committee chair, said Saturday confirmation hearings would begin October 12. 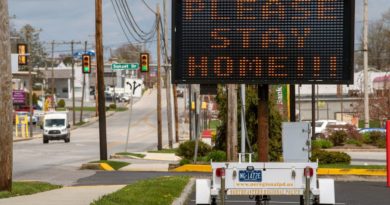