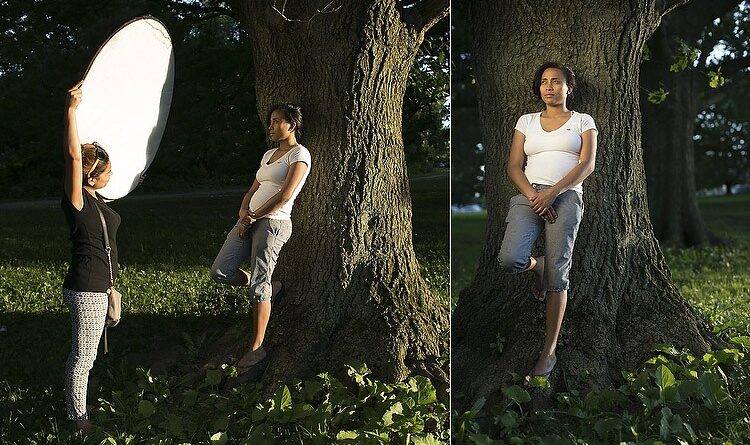 I’ve been making my living as a photographer for over 20 years, and I have accumulated thousands of dollars of gear in the process. I have the latest Canon DSLRs, a full complement of lenses, strobes, light stands, gels, filters, softboxes, tripods, and even some video and audio gear.

But the one thing that often makes the biggest difference in the quality of my portraits is a simple $20 reflector. I never leave home without one, and neither should you.

When shooting outdoor portraits, the first thing many photographers think about is the background – but first and foremost, the pros consider the quality of the light. They know, for example, that a portrait with nasty overhead lighting is not going to work, no matter how cool the background.

A reflector can help you salvage bad light, and turn okay light into something magical. You can use your reflector from below to fill in shadows, or from above to block distracting light. You can bounce the sun from a silver reflector to create a main light, or you can use a reflector with a black side to create deeper shadows. You can even sit on your reflector to keep your pants clean when shooting outside, or pop it open dramatically to dazzle young children.

Most of the photos in this article were shot with a 5-in-1 reflector you can buy for less than $20 USD. 5-in-1 refers to the fact that the reflector and cover can combine to give you five different options: white, silver, gold, and black sides, as well as a diffuser.

Here are six tips to help you use a reflector to transform your photos.

1. Use a reflector for fill light

The most traditional use of a reflector is to simply reflect light into the shadows. I took my wife, Karen, out into our local park to demonstrate this.

In the photo on the left (above), Karen is photographed in nice soft light, but there are still pretty deep shadows under her eyes and chin. In the photo on the right, however, she is holding a reflector at her waist. The shadows on her face are noticeably lighter and there is a subtle catchlight (a reflection of the reflector) in her eyes. If she were an older person with more textured skin, the contrast would be even more dramatic.

Of course, you may not always want to fill in the shadows in this way, but if you are trying to flatter someone it almost always helps.

You don’t even need an official photo reflector. Anything that reflects light will work. In a pinch, I’ve used everything from old newspapers to a nearby person wearing a white shirt.

2. Use a reflector as the main light source

This is one of my go-to reflector moves, and it’s an easy way to wow your friends and family.

You position your subject with the light hitting them from behind, then use a reflector to bounce the light back into their face. You will get nice soft light on your subject’s face, with a dramatic rim light on the back of their head. The only trick is positioning yourself so the light doesn’t go straight into your lens and create lens flare (unless you like that look, of course).

In the photo above, the sun is hitting the left side of my subject’s face and arm. The light from a reflector is bouncing some of the sun back to light up her face.

You may also notice the shallow depth of field in the photo above. If you are lighting with a reflector, you can jack up your shutter speed as much as you like to allow for a wide aperture (this photo was shot at 1/1250s at f/2.0 with a 50mm lens). If you were using flash to create this same effect, you would have to lower your shutter speed (to 1/250s or whatever matches your camera’s sync speed) to sync with the flash, requiring a narrow aperture and a greater depth of field (which will kill the whole look).

Yes, yes, some of you are no doubt thinking, “What about high-speed sync?” Well, yes, that could give you the same effect if you had the right equipment (and know how to pull it off). Or, you know, you could just use an old newspaper as a reflector.

For the example above, I positioned Karen against a tree and had her cousin, Claudia, reflect a spot of sunlight on her from about 10 feet away. At this distance, the light from the reflector looks more like it is coming from a grid spot or snoot (hard light) – in other words, it’s a focused and dramatic beam (notice the fall-off of light on her legs). It’s a cool look that you can recreate with a reflector, a few feet of aluminum foil, or your bathroom mirror. Your friends will be wowed and ask what fancy gear you used for the shot (and your family will ask what happened to the bathroom mirror).

For a slight variation on this technique, we moved the reflector slightly behind the subject (relative to the camera) to create a dramatic rim light on the face in a profile shot (see below).

3. Use a reflector to block light

Sometimes you’ll find yourself in beautiful, shady light under a tree, except for that pesky sunbeam that finds its way through the leaves to light up your subject’s left ear. When this happens, turn your reflector into a light blocker (sometimes called a flag or gobo).

A few years ago, I was doing a maternity portrait in a local park when a newspaper photographer snapped my picture while I was using my reflector as a gobo (shown in the image below). If you look at the reflector, you can see the bright spots of sunlight that it’s blocking (imagine how those spots would have ruined the final image if we didn’t block them!).

4. Use a black reflector to create more dramatic shadows

Sometimes, you actually want to deepen the shadows. I use this technique all the time in my headshot studio. Below is a photo of me with a white background. In the first shot, I have a silver reflector opposite the main light, sending light back towards my left cheek. In the second shot, the reflector has a black cover on it, gobbling up reflected light to leave a dark shadow on the cheek.

Except for the small change of literally flipping the reflector from one side to the other, the lighting setup is identical, but the effect is pretty dramatic. (For you studio lighting enthusiasts out there, my key light here is a large softbox, and there are two bare heads pointing at the background to make sure it is a nice, bright white).

This is the same technique used in the famous Steve Jobs portrait where he has his hand on his chin. In addition to creating a little drama, you can also use this technique to give someone a photographic face-lift by trimming pounds from the dark side of their face and under their chin.

5. Who holds the reflector?

You may be saying to yourself, “But I don’t have an assistant! Who’s going to hold the reflector for me?” I usually don’t have an assistant, either, but there is often someone nearby who is more than happy to help, be it a family member, passerby, intern, wedding guest, etc. Sometimes, you can even have the subject of the photo hold the reflector themselves. Of course, if you’re in the studio, or outside on a day without too much wind, you can just pop your reflector onto a light stand (like in the studio shots of me above).

In the photo below, I was shooting wedding portraits on a beach in the Florida Keys. My reflector assistant that day was one of the bridesmaids, who truly enjoyed helping her friends out with their portraits.

6. Reflectors in the environment

Once you get the hang of reflectors, you’ll probably start noticing reflected light everywhere. Ever see a white building getting blasted by the sun? Well, that’s nothing but a giant reflector! Depending on what’s around it, you may have found yourself a giant studio with no rental fee.

Mind you, anything that reflects enough light can work as a reflector. A brick building, a large truck, or a flock of seagulls flying by at just the right moment – it all works!

Although they may not be as sexy as strobe kits, reflectors can often yield similar or superior results for your portraits and are cheaper and easier to use. I will leave you with a few more example photos, shot using nothing more than a reflector.

In the child portraits below, note that there is light behind the kids in both cases, but there is still beautiful light on their faces. Same goes for the athlete portraits.

As a final image, I leave you with a group of wedding guests who were so enamored of my reflector that they wanted a picture with it. Hopefully, you will soon have similar feelings toward your own reflector!

Do you have any additional reflector tips to add? Please share them in the comments below! 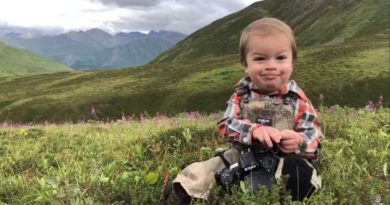 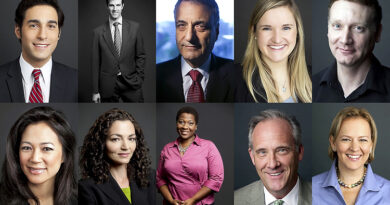