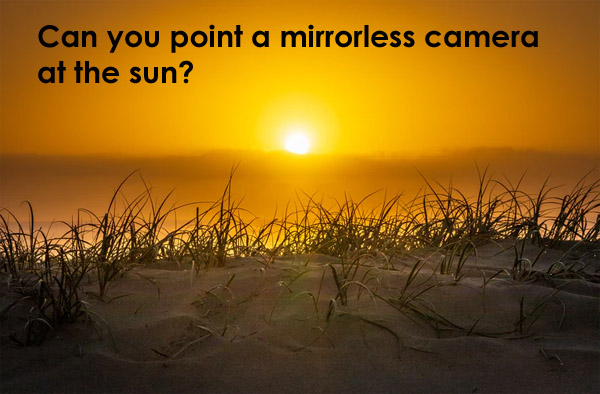 A mirrorless camera’s sensor is always exposed to the image you’re trying to capture, which has its advantages and disadvantages. A major disadvantage is the risk of sensor damage when changing lenses, or when capturing extremely bright environments.

Which begs the question, can you point a mirrorless camera at the sun?

The quick and simple answer to the question—No, you shouldn’t point your mirrorless camera at the sun in most cases for extended periods of time. But, as it is with photography, this is not a one-size-fits-all-answer, and you have to understand the reasoning behind it to grasp the complete picture.

What damage can the Sun Have on Your Camera?

We’ve all used electronics, and we understand that each electronic device consumes a certain amount of power. If you pass a higher electric charge through the device that what it is rated for, you are likely to damage the electrical components. A camera’s sensor is made of photosensitive material. When light hits a pixel on the sensor, an electric charge is produced. The higher the intensity of light, the higher the electric charge that is generated. That means if you expose the sensor to a source of light that is too bright, then the sensor can be damaged. The Sun is the brightest natural source of light that is available to us. If you expose your mirrorless camera to the sun even for a brief time, the total amount of light can be enough to damage the sensor.

A Useful Analogy To Understand The Risks

When you’re talking a walk outside on a cloudy day in the evening, you can comfortably look at the sky and even the sun without flinching. But, if you’re out on a sunny day when the Sun is at its brightest, you wouldn’t dare to look at the sun directly, would you? You understand that by doing so, you can damage your eyes.

Mirrorless cameras are designed similar to a human eye. Instead of a pupil, they have an aperture, and instead of a retina, they have a sensor. If the sun is bright enough to cause damage to your eyes, then it can very well damage your camera. So, remember this. If the situation is such that you wouldn’t look at the sun directly, it is not wise to point your camera to the sun directly either. The analogy is not perfect, but it can be a simple guideline to follow when using your camera.

Let us consider some real-world scenarios to understand this better.

In fact, we have a couple of excellent articles on our website covering how to master sunrise photography and how to capture beautiful sun-flares which goes to show that you can capture the sun safely with your camera.

As I mentioned, the damage to the sensor will largely occur due to the excessive amount of light entering the sensor. Just to give you some perspective, let us run some numbers.

An adult human’s iris has an approximate diameter of 13mm. An 85mm lens at F/1.8 would have an approximate aperture diameter of 47mm. That is approximately 3.5 times the diameter and almost 12 times the size (are wise). If the sun is too bright to look at with naked eyes, just imagine the amount of light that would enter your camera even at fast shutter speeds. If you have a DSLR camera, then you might get away with taking pictures of the sun, unless you’re using live mode. With mirrorless cameras, you don’t get that luxury, as the sensor is always exposed. In that case, it doesn’t matter what your shutter speed is, the time you spend framing the shot is likely going to cause the most damage. Some mirrorless cameras manufacturers have cameras that don’t change the actual aperture until you take the shot (similar to DSLR cameras) and keep the aperture at the widest instead. In that case, it doesn’t matter if you’re shooting at F16 or F1.8; the aperture will be set to the widest value until you take the shot.

Other Kinds of Light That Can Damage Your Camera

The Sun is not the only source of light that can cause this kind of damage to your camera. Any intense source of light can do the same job. Even if you’re a hobbyist, the source of light with that potential that you’re likely to experience is concert lights, also called laser lights. These lights are common in discos, weddings, concerts, music festivals, and many other types of events. Laser lights won’t annihilate your sensor like the Sun, but they will surely kill the pixels (on the sensor) that they come in contact with. Just have a look at this small video to see a live preview of the damage.

As you clearly see, the damage to the sensor happens almost instantly as the laser shines into the camera. Thankfully, there is a workaround to this problem. If you can correctly identify the type of lasers being used, you can make a call if it is safe to use your camera. Generally, lasers of class 3B and below are safe for cameras, and even for the naked eye. A contrasting example is tattoo removal lasers, which are classified as class 4. They are not safe for cameras, or your eyes. If you do get a chance to watch a tattoo removal process, then wear eye protection, and do not try to record it with a camera.

Even if you take plenty of precautions to avoid sensor damage, you can still cause significant damage to your camera. That is because even if you reduce the amount of light entering your camera by closing your aperture, or using an ND filter, your camera is still being exposed to a lot of heat. If you aren’t careful, it can damage your camera’s internals, including the sensor, the shutter, or the diaphragm. Here is a video of an experiment demonstrating the heat damage that can happen to a camera in just a few seconds.

The experiment in the video is obviously an extreme example as they use a 400 mm lens at a wide aperture (probably) pointed directly at the sun for multiple seconds. But, the damage to the camera that they show is also quite extreme. In just 6 seconds, the sensor is absolutely destroyed, which just goes to show how quickly this can happen if you’re not careful. To see more examples, simply search for melted shutter eclipse on your favorite search engine.

Your Eyes are Also at Risk

It’s not just the sensor in the camera — your eyes can also get severely damaged too if you’re not careful while shooting directly into the sun. As kids, we all have done science experiments where we focus sun-light through a magnifying glass in an attempt to burn a piece of paper. A camera lens operates in a similar manner, but on a larger scale. If you’re going to use the viewfinder to frame your shot, you’re essentially replacing the paper in the science experiment with your eyes. Your eyes won’t be in the line of sight when you’re using a mirrorless camera, and you’re likely to damage your viewfinder in that case. Some manufacturers, like Olympus, do mention this risk in their user manual. But, if you’re using a DSLR, the amount of light coming through the viewfinder can severely damage your eyes in seconds. On top of that, retinas do not have pain receptors, so you might not even feel it.

What About DSLR Cameras?

We’ve talked plenty about mirrorless cameras, but what about DSLR cameras? Are they immune from all the problems that we discussed?

How To Safely Use Your Camera in The Sun

When you’re going out in the sun, you protect yourself with sunblock and a pair of sunglasses. Similarly, you can negate many of these risks by using the proper protective gear. For cameras, there are two major pieces of equipment that you can use to reduce the risk of damage.

The first equipment that you can use is ND Filters. These are essentially sunglasses for your camera, and they attach to the front of the lens. There, they help block a specific amount of light that enters the lens. You can find fixed ND filters, which come with their very own stop rating, or variable ND filters which can work with a range of stops. If you’re using your camera when the sun is out, an ND filter is a must-have to protect your gear and manage your exposure. If you’re attempting to capture a picture of the Sun, then an ND filter won’t suffice. For that, you will need a solar filter for your camera. Solar filters are special filters that block over 99% of light and heat and are primarily designed for telescopes. But now, you can find solar filters for most modern digital cameras as well.

Pointing your mirrorless camera (or even your DSLR) directly to the sun isn’t entirely risk-free, but it also doesn’t mean that the damage to your camera is guaranteed. By understanding how and when the damage can occur, and by taking the appropriate steps to mitigate the risk, you can safely use your camera in the sun and protect your eyes as well.

If you enjoyed this article, you will also love these summer photography tips.

Photo Of The Day By Beth Young 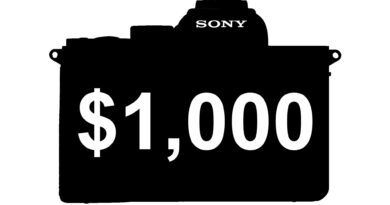 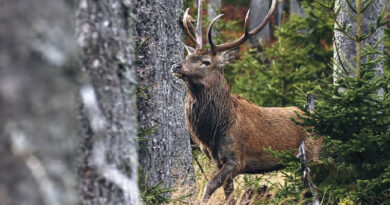 The Move Towards Motion Part 8 – Shooting For Stock