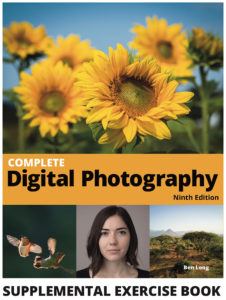 (This is an excerpt from the introduction to the companion exercise book for the 9th edition of Complete Digital Photography. It can be downloaded free from the CDP 9 support page on the website.)

Throughout your life you have probably been told to practice one thing or another—musical instruments, sports, handwriting, whatever. If you’re like me, you were never thrilled with the idea of practicing, and though you understood that the exhortation to practice was true and important, you also didn’t really believe it. Maybe you clung to some of the popular cultural myths that we share—the myth of the “natural” athlete or the “gifted” musician—and so skipped practicing with the hope that you would turn out to be one of those natural, gifted individuals. The truth is that, while there are people that start with a skill level above the normal baseline, those people only achieve greatness because of their extreme dedication to practicing. The same is true with photography.

It can be difficult to understand how important practice is to the discipline of photography because the camera takes care of so much of the craftsmanship of making an image. There is, of course, plenty of theory to understand, as well as technical considerations to weigh when making a photo, and learning those things takes practice. What can be less obvious is that visualizing and seeing as a photographer also requires practice. The good news is that the process of seeing is something that you can learn and improve at.

Because we are constantly looking at things during the normal course of being alive, we don’t always think of “seeing” as a skill that can be learned, but I can offer two proofs that your ability to see changes with practice:

First, in addition to seeing, most of us are also constantly hearing things. If you’ve ever learned to play a musical instrument then you know that, through practice, you can train your ear to hear pitch, intervals and rhythm. Similarly, your eyes can be trained to recognize form, light, and many compositional ideas.

The second proof is something that might sound familiar: you spend an afternoon wandering about with your camera, searching for things to shoot, only to end up frustrated because you feel like you’re repeating yourself. All of the compositions you come up with are similar to other compositions you’ve made before, and all of the subject matter that you notice is similar to other things you frequently photograph. While this kind of photographic rut can be very frustrating, it’s also evidence that seeing is a skill that can be learned, because what has led you to this rut is repetition, and while feeling like you’re in a rut can be demoralizing, it’s also a valuable step toward developing something that all photographers need.

More about how to build a photograph

In Chapter 9 of Complete Digital Photography I wrote about how an aesthetic for light is critical to the photographic process and how all photographs begin with an impulse, sometimes slight, which the photographer must tune into and explore to make the best photo. No matter how you do it, occasionally, you will “solve” a photograph in a very satisfying, successful way. Perhaps that compositional solution also requires specific exposure ideas—dropping shadows into black, for example, or depending on shallow depth of field for subject isolation. When you find those satisfying solutions you will remember them and, because they were successful, you will probably find yourself deploying the same solutions in other situations.

In Chapter 9, I discussed the practice of trying to fill your media card when you go shooting. In that section I also showed four images that I shot over the course of an hour of shooting in an industrial park. The images are very similar in terms of their central compositional idea, and I mentioned in the book that I had shot those four images at different times during that hour and that I had not been actively looking for images with similar compositions. But there’s a second part to that story, which I didn’t mention.

After importing those images into my Lightroom library I tagged them with the keywords “vertical line” and set them aside. This was in the middle of a Lynda.com shoot and I had other images to find and lessons to prepare and, over the course of the next few days I stumbled into  a few other images—shot at other times—that had a similar composition. I spent a few hours looking through my catalog and found these.

The time stamps on the images were enlightening. The oldest of these photos was shot in February 2008, the latest in October 2017. I had been shooting this collection of similar images without realizing that I had other images composed the same way. One could argue that I’m in a rut that’s so deep I can’t even tell that I’ve fallen into it; I prefer to think of it in a different way.

Improvisational musicians, whether they play jazz, blues, or rock and roll, typically engage in a similar process. They practice their scales and modes and intervals, but they also “noodle.” They fiddle with melodies, snatches of music, and when they find one they like they repeat it over and over. These are known as “licks” or “riffs,” and over time a musician builds up a collection of licks that they’ve practiced so much that playing them is simply an act of muscle memory. When it comes time to improvise a solo, these licks and riffs are brought out, re-arranged and strung together—within the structure of whatever song is being played—and it is these snatches of song that make an individual musician recognizable. These licks and riffs comprise the player’s musical vocabulary.

Over time, photographers also develop a vocabulary. One component of my personal vocabulary is to find vertical lines that bisect a scene. Sometimes the lines are formed by objects, sometimes by tonal change; sometimes the images are in color and sometimes they’re black and white. I don’t think that this particular bit of vocabulary has ever led me to a great image, but it has served me in several other ways. First, I find it pleasing, which, in addition to being its own reward, helps me keep my confidence up. On an otherwise unproductive shoot, coming back with any pleasing image can keep you motivated. Second, as I’ve said repeatedly, your job as a photographer is to guide the viewer of your photograph to see a particular thing. Apparently, I have a tendency to see vertical lines. While an individual vertical line might not be interesting, however, having a large collection of expressions of this particular piece of vocabulary reveals something that isn’t normally visible—a form that repeats through time and space.

Finally, practicing this piece of vocabulary through repetition (even if it’s a practice and vocabulary that I wasn’t consciously aware of) has a potential future payoff. Somewhere out there in the world there might be a piece of subject matter that would make a fantastic photograph if only it were represented as a vertical line up the middle of a portrait-oriented image. If I ever stumble into that particular situation, I will certainly recognize it, and I’ll be ready to shoot it.

Your photography will improve as you have a larger vocabulary to work with—more photographic licks and riffs that you’ve composed and shot many times—which you can bring to bear on subject matter or light that you have had an impulse to shoot. You can only expand that vocabulary through repetition and practice.

Why practicing photography is hard

Actors, musicians, and dancers understand when they’re practicing. They go to rehearsals or into practice rooms and have no doubt that what they are doing is practicing. Similarly, a painter, sculptor, or illustrator knows when they are simply sketching or creating a “study” that will later be developed into a larger idea. The ability to go to a place of practice is important because, psychologically, it’s a safe space. You can get frustrated while practicing, but if you don’t produce great work during a practice session, you usually don’t punish yourself (at least not too badly) because you know you were simply practicing.

With photography, it’s much harder to allow yourself the safety of a practice space. Every time you go shooting you know there’s a possibility that you could stumble into something fantastic and come back with a career-making shot. Because of that potential, it’s very difficult to allow yourself the freedom from creative responsibility that practitioners of other disciplines get to have when they practice.

I don’t have an answer to this problem, but over time, I have come to realize that I’ve grown more capable of allowing myself to practice without being disappointed when I finish. It is ok to only have “practice” images rather than a great portfolio shot. Here are some ideas that might help you more easily embrace the discipline of practicing photography. 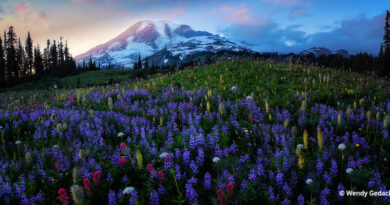 Photo Of The Day By Wendy Gedack 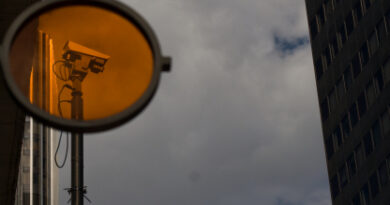 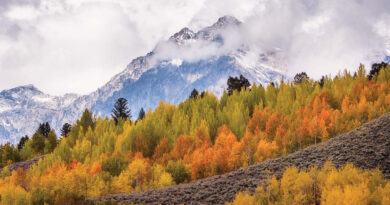 Photo Of The Day By Kristen Ryan